Today marks the beginning of an irregular off-season feature here at BCB. On slow days or during slow times, I'm going to tell you some of my own personal baseball stories. Many of them are Cub-related; this one isn't, but I think it will still interest you.

In the summer of 1968 I was attending a summer camp in northwest Wisconsin. From time to time they'd take us on various trips in the area; one of the most popular ones was a drive to Minnesota, about two and a half hours away, to see a Twins game at Metropolitan Stadium in the Minneapolis suburb of Bloomington.

And it was thus, on July 23, 1968 we arrived there to catch the second game of a doubleheader between the Twins and Angels, and I snapped this photo: 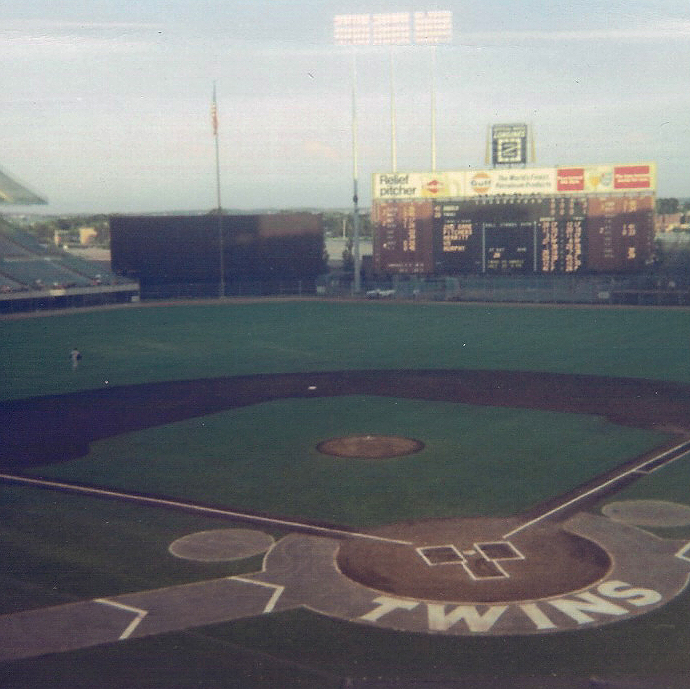 I got to go back there one more time from camp, on August 13, 1971 --still have the ticket stub from that one -- and saw some 20-year-old kid pitcher named Blyleven throw a CG win over the Tigers.

Twelve years later, I had a friend who had just gotten his private pilot's license and I enjoyed flying with him occasionally -- only in good weather, you understand -- and we decided on July 30, 1983 to fly to Minneapolis. He wanted some flying practice and I wanted to see a game at the then-second-year Metrodome. We flew into the international airport there -- it was cool, the controllers cleared us to land ahead of a Northwest 727 jet, which had to wait for us.

On renting a car and leaving the airport, we noticed the then-still-standing Metropolitan Stadium... with a gate wide open. We decided to park and go in; it was a beautiful Saturday afternoon. We walked the deserted concourse and ran into a man who had been a Twins employee for years; he had brought his son by to see where the Twins and Vikings had played for two decades.

There was trash and debris everywhere; among some papers I found some blank checks that had been printed for "World Series 1965 Ticket Refunds"; I still have that around somewhere.

And I took these photos -- eerie, don't you think? They look like what you'd see in a futuristic science fiction film, where familiar landmarks still stand, except overgrown by weeds (at the time of the photo, the stadium had been abandoned for a little less than two years): 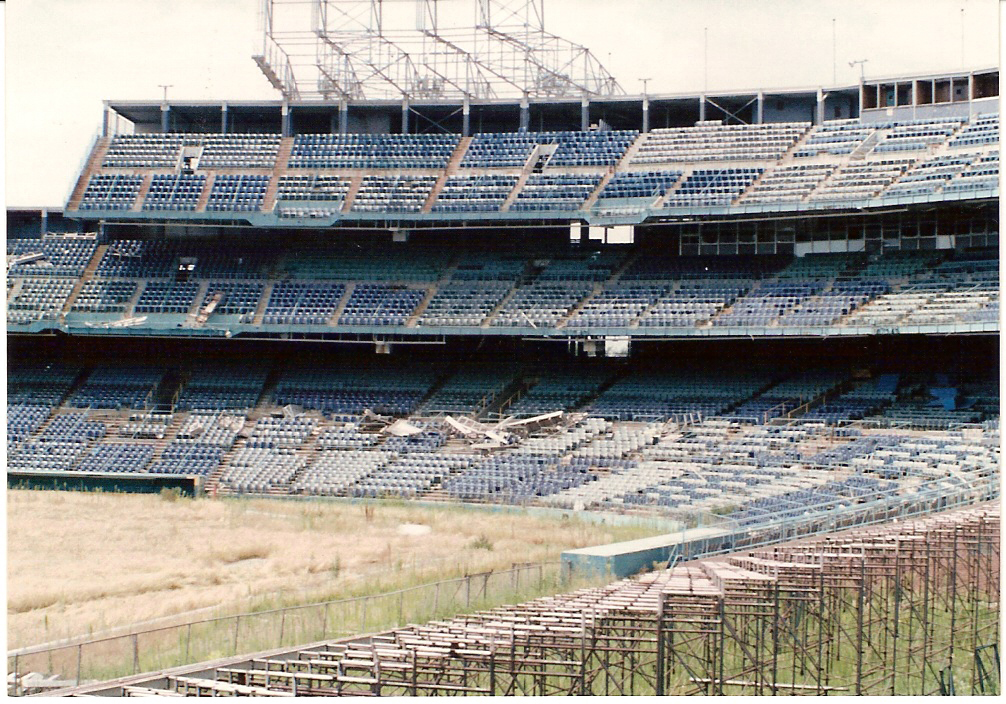 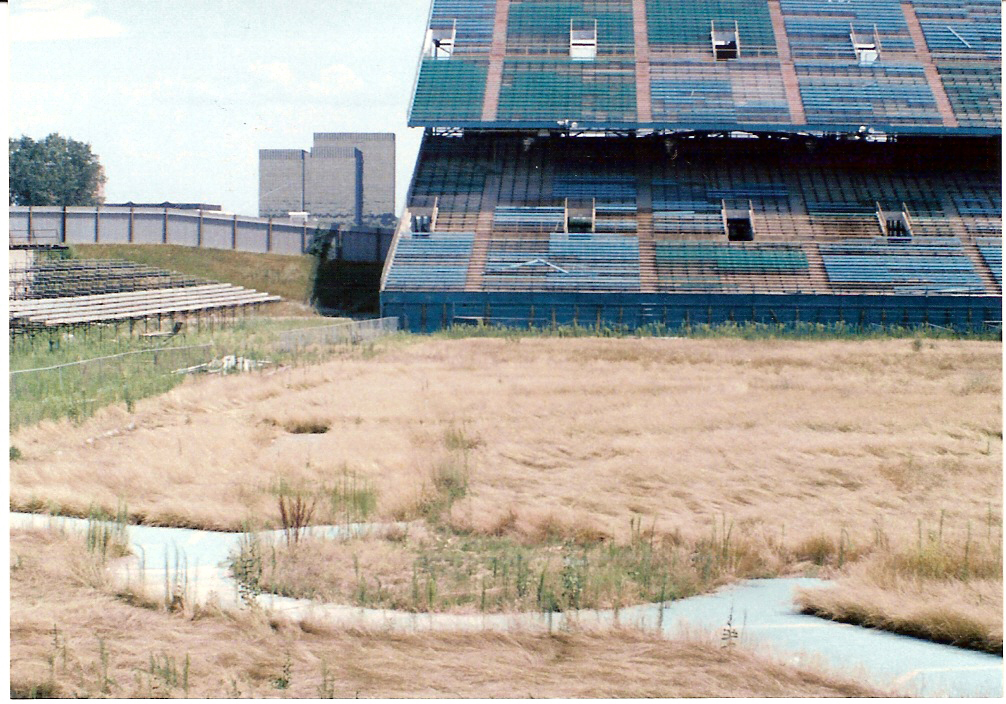 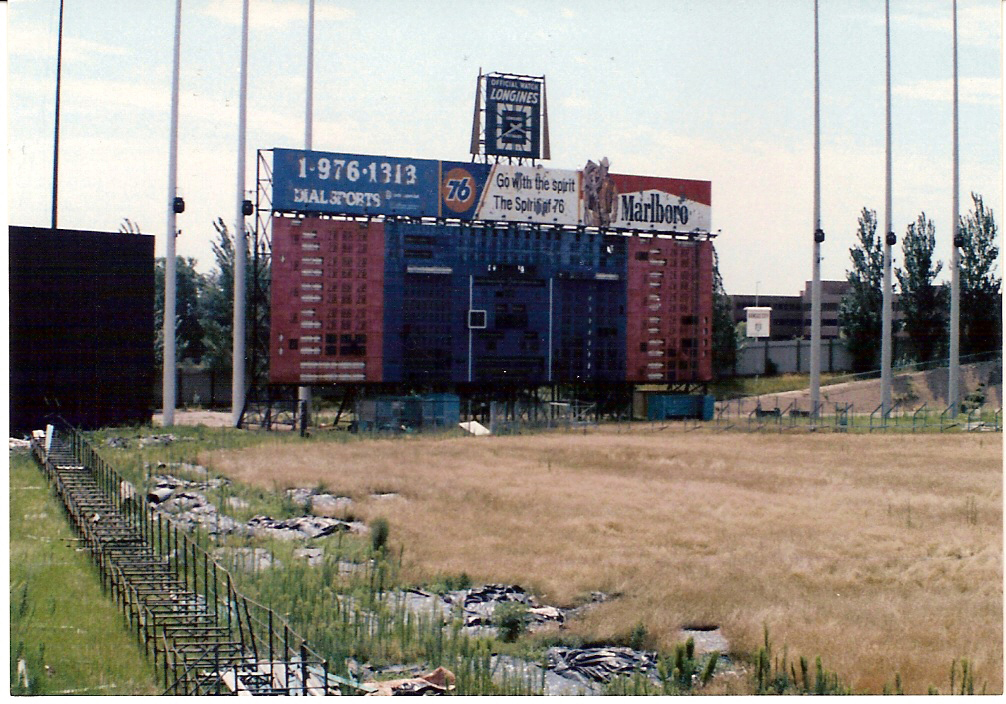 We then headed for downtown Minneapolis, where we saw the seventh-place Mariners beat the sixth-place Twins 7-4. With a crowd of only about 12,000 in the huge Metrodome (and this was before they curtained off a lot of the upper-deck seats there for baseball), the sounds of the crowd and the baseballs hitting bats echoed around the dome. It was the first game I'd seen indoors, and it felt odd. I imagine that when the place is full, and rocking, as it was during the Twins' two World Series there, the noise is deafening.

The Metrodome was seen as a necessity because of the fact that Minnesota winters often linger into May. What they didn't factor in was the fact that summers in Minnesota are gorgeous, and that a summer night at an outdoor park (such as the ones I spent there in 1968 and 1971) are an attraction in themselves; now, of course, the Twins are trying to get that atmosphere back and have a new stadium built -- a retractable dome that resembles the one in Houston; the Vikings want one too.

In the words of Joni Mitchell:

Don't it always seem to go
That you don't know what you've got
Till it's gone
They paved paradise
And put up a parking lot.

And in the case of the Met in Bloomington, Minnesota, that's exactly what they did. If you don't already know, that is the site of the Mall of America.