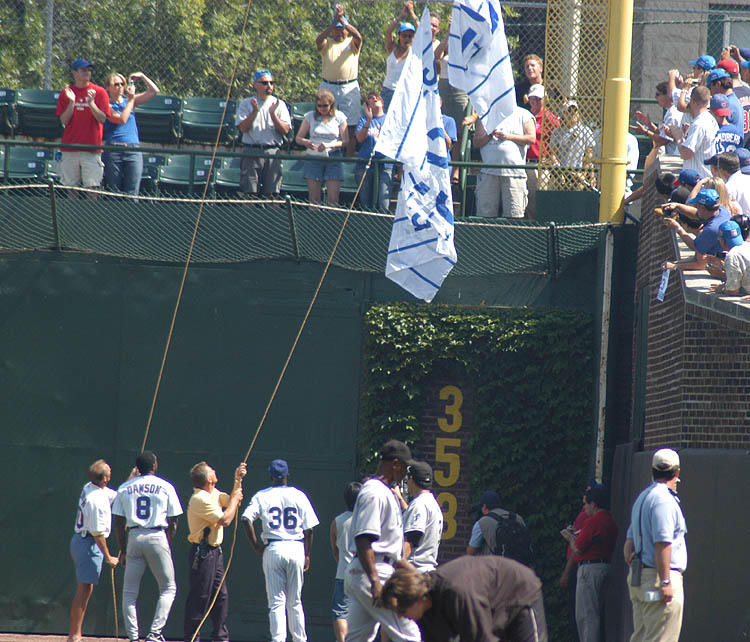 Fanfares (a few too many, Mike & I thought -- we were expecting some French knight to pop over the top of the upper deck); cheers; Hall of Famers and Cub heroes in attendance; that was the beginning of our day, as the Cubs retired 2005 Hall of Fame inductee Ryne Sandberg's uniform #23, now flying on the right field foul pole underneath Billy Williams'.

And when it was over, I said to Mike:

The next time they have a flag-raising ceremony in this place, I want it to be a World Championship flag.

And when that was all over, the Cubs dispatched the Marlins 14-3 with great ceremony, turning a close game into a festive blowout with an eight-run seventh inning, that was begun thanks to Mark, who excused himself to go to the men's room, which resulted in Carlos Zambrano's leadoff triple.

Mark is very happy to have contributed to the Cubs' offense in this way. Hey, we've got to laugh and have fun in some way in this lost season, don't we? When Z came up for the second time in the 7th, Mark said he better go to the men's room again -- unfortunately, it didn't work, as he grounded out.

Before that, Mike had brought out several historic Sandberg scorecards, including the one from the 1981 game in which he got his only non-Cub hit as a Phillie at Wrigley Field, the famed Sandberg game from June 23, 1984, and his last game at Wrigley Field in 1997.

And, we had a larger-than-usual group today, though it wound up one short when Jeff, who had arrived late due to being stuck in a horrendous Lake Shore Drive traffic jam because he forgot about the triathlon being staged there today, and in an even worse mood because his cellphone had accidentally been thrown into the washing machine in his shorts last night, left after the ceremonies. But Phil, Dave, Mike, Howard, Jon, Mark and I all enjoyed the festive afternoon.

Dave and Phil, of course, spent quite a bit of time discussing the 2006 team and how it might be constructed, and many of the ideas they (and I, chiming in when I could overhear them) discussed are the ones we have discussed here. Also mentioned was the fact that all of us think that Jim Hendry will likely sign Derrek Lee to a Ramirez-like contract extension sometime during the off-season.

Now, to the game. I suspected that Carlos Zambrano was going to be on even during the ceremonies, when I spotted him beginning his warmups. Many starters start throwing off level ground in the outfield before their work on the bullpen mound, and even there, Z was throwing the ball with authority and zinging it in at what appeared to be near-100 MPH stuff.

It showed in the first four innings, when the only hit he allowed was an infield single that went off his glove and that couldn't be handled by Nomar at 3B. Mike asked me after that if I thought Z had no-hitter stuff and I agreed -- we both thought he might have thrown one today. In fact, he might have gotten through seven innings with a no-no if he'd been able to handle that ball, and another comebacker that he spun around several times and couldn't find sitting right next to the mound (same hitter, incidentally, for both, Jeff Conine). The only other hit to that time was a double just out of Derrek Lee's reach by Juan Pierre, in the sixth just before Conine's second infield hit; I remarked to Mike that had there been a no-hitter going at that time, Lee might have put in a dive for the ball.

Had he made the second play, that'd have been the third out in the sixth inning, and Carlos Delgado would never have come up with two runners on base, to hit the only real mistake pitch Z made. Delgado had a really nice at-bat against the extreme shift the Cubs put on (the shift worked in the 2nd, as what ordinarily would have been a single up the middle was handled by Ronny Cedeno, playing right behind 2B) -- he was clearly just trying to go the other way with Z, and wound up muscling the ball out of the ballpark for a three-run homer, temporarily tying the game.

That's when the Cubs exploded; Lee hit a ball that Damion Easley, playing a somewhat unfamiliar position (SS; he's played only about 15% of his career games there), booted; the Cubs scored the lead run in that inning on a Ronny Cedeno single. Cedeno had a really nice at-bat, fouling off several pitches, and had a similar AB in the 8th, impressing Dave -- and Dave is notoriously hard to impress regarding young players. He and I agreed that Cedeno could be in the mix for SS next year (along with the possibility of signing Rafael Furcal), and perhaps, if Nomar (who had a good day today, with two hits, a walk and three runs scored) plays well for the next month, he could be signed to play left field.

But it was the seventh, with Z's leadoff triple -- and he was really motoring, if you didn't see it -- followed by several other hits and two walks off Josh Beckett, Antonio Alfonseca (who was booed almost as much as Andy MacPhail was in the pregame ceremony) and John Riedling, the ex-Red who looked terribly out of shape, resulting in an eight-run explosion; the Cubs had more fun in the eighth, scoring two more.

When Alfonseca was taken out of the game, he got into it with plate umpire Laz Diaz, resulting in his ejection; that's the second time I can remember ol' Six-Finger tossed in a weird situation, the other being this 2003 game when umpire Justin Klemm made a controversial call on a Moises Alou hit, and Alfonseca charged at him from the Cubs' bullpen.

Incidentally, see Ross' hilarious diary entry on the right sidebar for the Top-10 Reasons Why Scott McClain didn't get an at-bat today. It really did make no sense whatsoever; he could have batted for Todd Walker, who was 0-for-5 (though he did hit a BP home run that Mark caught), or for Jeromy Burnitz, or for Todd Hollandsworth (who I figured was starting to showcase him for a possible pre-postseason-roster-deadline deal -- GOOD! he was 2-for-5 today, maybe the scouts were impressed!).

But, it was not to be. McClain (wearing #9, the third player to wear that number this year) only got into the game after Lee had homered for the second time in the 8th, his thirty-ninth (also his 200th career homer, and 83rd extra-base hit of 2005), keeping him three behind Andruw Jones, who also went deep twice today in Milwaukee (Lee is also still eight RBI behind Jones after today's game). McClain did get some action -- all three ninth-inning putouts, each of which was a comeback grounder to Ryan Dempster.

That means that the last two appearances for our "closer" have been in the last inning of blowout wins (also, in last Tuesday's 10-1 win over Atlanta). It also means that in the six games of the current homestand, the Cubs outscored two of the better teams in the NL East 33-20, but won only two of the six games. This makes no sense at all, but neither has most of this season.

The ceremony was lovely, although Sandberg's speech was much more pedestrian than his terrific induction address. Cub Hall of Famers Billy Williams and Ernie Banks were there, along with former Sandberg teammates Bobby Dernier, Gary Matthews, and Andre Dawson (dressed oddly in a Cub jersey and gray Marlins pants), who raised the flag. HoF President Dale Petroskey paid Ron Santo a compliment by saying, as the crowd chanted 'Santo! Santo!', "We'll gladly accept any other Cubs that the writers or the Veterans Committee vote in." Sandberg then made a round of the field, shaking hands even with many Marlins players who were out stretching in right field.

If only every day at the ballpark could be both this festive, and have this good a result.

Finally, buried in this notes column is an interesting development regarding Corey Patterson's brother Eric. After dominating the Midwest League, Eric Patterson has been promoted for the season's final week, jumping two levels to Double-A. I mentioned this to Dave, and his correct comment was, "Plenty of players dominate their minor leagues but struggle in the big leagues" -- giving as a good example White Sox 3B Joe Crede.

But, as I pointed out to him, Eric P. does have talent, and he'll likely be added to the 40-man roster in the offseason and perhaps get a spring training invitation. He's also going to the Arizona Fall League, which is widely viewed as a league for players who are getting close to the majors.

So we can hope for next season, and at least enjoy wins when they come. The Cubs end the season series vs. the Marlins 5-4. Bring on the Dodgers, who in this wacky season still have an outside chance (5.5 games out of first place) at the playoffs despite being 13 games under .500 going into today's action.