But that's not what I want to talk about this morning; last night, I was out at a local committee meeting of the Directors Guild of America, and thus did not hear till this morning of the shocking, sad and untimely death of Hall of Famer Kirby Puckett at the age of 45 - some sources say 44, but his page at baseball-reference.com says he was born in 1960. Even more sadly, Puckett died only eight days before his forty-sixth birthday, which would have been a week from today.

45. First of all, that's only four years younger than I am, and it gets a bit frightening to know that this is an age at which human beings start to give in to the ravages of age. And Puckett, unfortunately, with his massive weight gain over the years since his forced retirement from baseball, was a time bomb waiting to go off. Here's a photo of him, happily running the bases after his game-winning HR in game six of the 1991 World Series:

And here is what he looked like signing autographs at the 2005 Iowa Cubs Fan Fest: 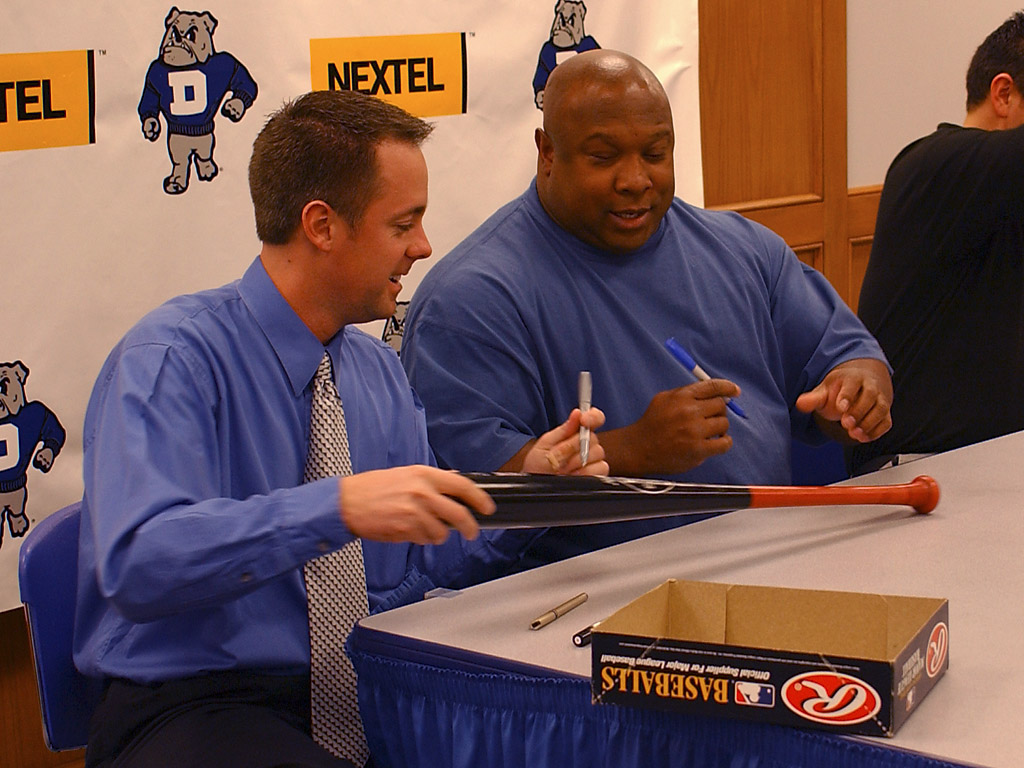 Shocking, and sad indeed. Puckett played the game on the field with an enthusiasm that was born in, I believe, his out-of-the-housing-project story; he was raised in the Robert Taylor Homes here in Chicago, which have since been demolished, and came out of Triton Junior College and (briefly) Bradley University in Peoria.

And I remember this about his early career, when I was much more into fantasy baseball than I am now -- I got lucky enough to pick him in his first big year, 1986, and all the guys in my league agreed -- there was absolutely nothing in Puckett's minor league record that would have hinted that he would someday hit over 200 major league home runs with over 2300 hits. His career, as most of you know, ended suddenly at the age of 34 due to early-onset glaucoma. He surely would have come close to 3000 hits, if not passed it, had his career lasted another five or so seasons.

Puckett's post-retirement, off-field problems are well known and it's not right to dwell on them here. The man came from nothing to make something of himself, and I think that's something we can all admire in a human being.

About the Cubs, a lineup of mostly minor leaguers annihilated the A's yesterday 12-3.

Tale of two Todds: Walker homered (yay! Keep hitting, TW -- Dusty won't be able to bench you, and Hendry will be forced to NOT trade you! -- Dopirak, Pagan and Coats also homered, off a collection of mostly obscure A's pitchers), and Wellemeyer continued to unimpress the scouts, allowing two walks and a run.

Spring Training Hall-of-Famer Scott McClain, last seen with the Cubs at the end of 2005 (and who had about the best week I've ever seen anyone have in camp, in March 2004), has surfaced with the A's -- he homered too.

About 30,000 are expected for the first USA game in the WBC today at Chase Field. Derrek Lee is scheduled to start for the USA; the Dominican Republic/Venezuela game, with Carlos Zambrano scheduled to pitch for Venezuela, is on ESPN at noon Central time.