Building A Cubs Champion: The AC Sign Must Go 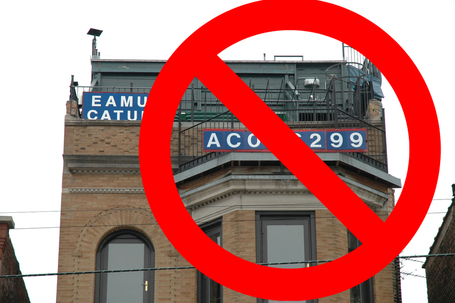 Since 1945, we as Cubs fans have been subjected to 63 years of really bad baseball. We had hoped that the hurts and pains and disappointments of the last 63 years were about to be assuaged by the best team most of us had ever seen; instead, one of the most spectacular collapses we have ever seen finds us looking for answers.

The answers lie, I think, in baseball-related changes on the field -- whatever will prevent a team that plays so well for six months from collapsing in three games. But what is it we hear about from the mass media? Smashing of pipes in the dugout in Dodger Stadium. Or the guy who's allegedly selling his Cubs loyalty on eBay.

Frivolous nonsense, in other words.

This post is going to be one of an occasional series here, designed to rid Cubdom of the dumb things, the irrelevant things, the stupid off-field things that shouldn't be part of us going into the future. This team has a long and storied history on the field, even when some of that history isn't the best. Should it be celebrated? Some of it -- for example, the pennants and World Series the team did win, and the great individual performances and games -- absolutely. Some of it -- things like the College of Coaches, poor decisions by management and ownership -- should be criticized and will be here, as they have in the past (maybe not enough, in the opinion of some).

So it is in that spirit that I say today:

I'll credit this idea to a comment made by BCB reader Shanghai Badger the other day on this very subject, which got me to thinking about it. For a number of years, this sign has kept track of the years since the Cubs won a division title, a NL pennant, and the World Series. It became an "insider" thing; I'd often have to explain what it meant to newbies, and of course all of us wanted to see it read "000000".

But what does that sign actually do, other than to remind us how bad the Cubs have been for a century? You may remember that when Cubs chairman Crane Kenney suggested that the Cubs might stop flying the "L" flag after losses at Wrigley Field, I criticized that idea (and in fact, they never did stop doing this). There's a difference, I think, in what each of these symbols means. Flying the "L" flag after a home loss says only, "We lost today." It's taken down before the next game.

The AC sign says, "We have sucked for 100 years and we're going to remind you of it not only during home games, but every single day of the year," since the sign stays up year-round (though as of yesterday, it hadn't been changed and in past years, it hasn't been changed until well after the next calendar year has begun). It celebrates failure.

Since a digit would have to be added to the sign before next April, I say it's time to get rid of it. Stop reminding us of all the failures. The Lakeview Baseball Club, obviously, is a private club, with no connection to Cubs ownership (other than the financial deal they made with them a couple of years ago), so they are obviously free to do as they please. They also have signs reading "EAMUS CATULI!" (loosely translated, "Let's Go Cubs!" in Latin) and "NEC ASPERA TERRENT" (the motto of the Prince of Wales' regiments, it translates as "Difficulties be damned"). Those are positive messages and ought to stay.

Get rid of the AC sign. Yes, doing that won't win a single game. (Those of you who have asked what I think are the on-field moves the Cubs should make for '09 -- geez, give it some time! The team's organizational meetings, where they'll discuss what happened this year and lay out a plan for next, won't start till October 19.) But it is part of changing the attitude. Look forward to the next 100 years with the attitude said on a T-shirt I once bought (and still own): "CUBS 2000: The Next Millennium Is Ours".