The Cub Can Of Worms: Mick Kelleher

Share All sharing options for: The Cub Can Of Worms: Mick Kelleher

Sometimes, these stories aren't necessarily going to be about how badly the player played, although Mick Kelleher was a pretty bad hitter -- in five years in a Cub uniform his "best" offensive season was 1979, when he hit .254/.296/.296 in 142 at-bats. Mick's career BA was .213 and he never hit a homer in 1081 major league AB. His value on the field was his defense -- he was a solid backup SS and 2B.

And I decided to add Little Mick to the Can Of Worms because his name was in the news recently; it appears that Mick, now 61 years old, will soon be named the first-base coach fot the New York Yankees. (He's been the Yankee organization's defensive coordinator for the last couple of years, after being a scout and coach for the Tigers.) Reading about this reminded me of an incident that surely qualifies him for this prestigious series. 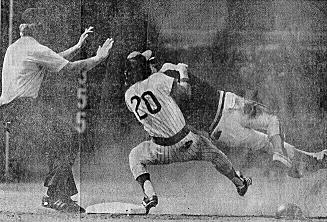 On August 7, 1977, Mick started the second game of a doubleheader against the Padres at Wrigley Field. The Cubs had lost the first game 8-6, which had dropped them out of first place for the first time since late May. They desperately needed a win to revive any flagging playoff hopes.

In the top of the second inning, Steve Renko hit Dave Kingman, then in his short stint with San Diego, with a pitch. The next hitter, George Hendrick, grounded to shortstop; SS Ivan DeJesus flipped to Kelleher for the force play. Kingman slid in hard to break up the DP. It was then that the fun started.

Kelleher took exception to the hard slide and took Kingman down. This sort of thing does happen from time to time on a baseball field, but keep in mind that Kingman stood 6-6 and weighed 210, and Kelleher was listed as 5-9, 176 (and that was probably generous). Still, Little Mick held his ground. Both players were ejected; the Cubs won the game 9-4 to make their record 63-45, but ultimately, fell far out of contention, finishing 81-81 (yes, they went a horrifying 18-36 after that August 7 2nd game victory).