The Cub Can Of Worms: George Mitterwald

Share All sharing options for: The Cub Can Of Worms: George Mitterwald

George Mitterwald was acquired by the Cubs from the Twins on December 6, 1973, as part of the "Back Up The Truck" policy then in place; management was dismantling the teams of the late 1960's and early 1970's because, well, they never won anything despite being heavily favored to do so. Rather than a photo of him as a Cub, I'm using Mitterwald's 1971 Topps card to illustrate this story because... well, have you ever seen a catcher's mitt that large? 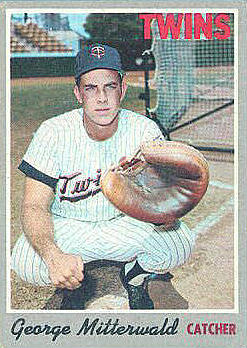 In any case, this was a "challenge" trade, something baseball people did more often in those days than they do now, a deal swapping players playing identical positions. Randy Hundley, 31 years old and with two bad knees, was shipped to Minnesota for the 28-year-old Mitterwald, who had hit 16 homers and drove in 64 runs for the Twins in 1973, with an OPS of .731 that was slightly above league average (102 OPS+). The 16 homers ranked tied for fifth (with Darrell Porter) among AL catchers in '73.

In his fifth game as a Cub, on one of those windy, warm April days that we rarely seem to have any more, April 17, 1974, Mitterwald hit three homers and drove in eight runs as the Cubs blew out the Pirates 18-9 (it wasn't even that close -- the Pirates scored five runs in the ninth after the game was well in hand). The last of the homers was off Steve Blass, pitching in his last major league game after suffering the mysterious loss of control that got a "baseball disease" named after him.

Only years later was this story told: Mitterwald had been told the day before, after the Cubs lost a 12-inning game to Pittsburgh on April 16, 8-5, that he'd be getting the day off on April 17. So he apparently went out and partied late into the night. The best day of Mitterwald's career, the 3 HR, 8 RBI outburst, was accomplished with a really bad hangover.

It was all downhill from there, too. By early June he was hitting .182 and was benched. (Tom Lundstedt, who briefly replaced him, wasn't any better -- Lundstedt hit .094 in 32 at-bats and was sent to the minors.) Mitterwald hit only four more homers the rest of 1974 and though he remained the Cubs' primary starting catcher through the 1977 season, he hit only 26 homers and .231 in 1067 Cub at-bats.