Both Jim Hendry and Lou Piniella have made no secret that they're going to move Kosuke Fukudome to CF, platooning him with Reed Johnson, and look for a lefthanded bat to play RF.

But what if they think outside the box just a little? Yesterday, the Tribune reported that Kenny Williams is scouting the Arizona Fall League for prospects he might want in dealing Jermaine Dye away. 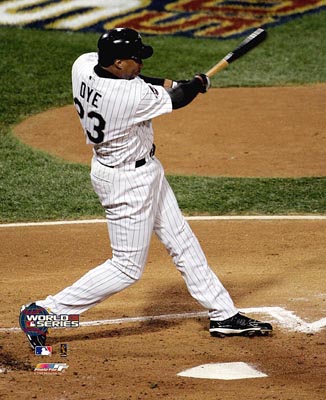 Dye hits righthanded, sure. But he has been a solid hitter for the White Sox for the last four years; has played in ten postseason series, including two World Series (and was named WS MVP in 2005); most importantly, his postseason numbers (.270/.320/.417 in 163 at-bats) aren't that much different from his career regular season line (.276/.338/.491), important in an era when Cub bats have disappeared once the calendar turns to October.

I think it's worth investigating -- if Kenny Williams is watching AFL games, perhaps he could be interested in Rocky Roquet, Esmailin Caridad or Steve Clevenger. I imagine he might also be interested in a major league infielder, since Orlando Cabrera is gone and they intend to move Alexei Ramirez back to his natural SS position. Would they want Ronny Cedeno?

What sort of deal could you put together to bring Jermaine Dye to the North Side?

I, personally, think acquiring him would help the 2009 Cubs. He'd have to change that number, though.