Share All sharing options for: The Big Cub Unit?

As reported today on the Cubs website and also by Paul Sullivan in the Tribune, the Cubs are one of six teams to have contacted Randy Johnson's agent expressing interest in signing The Big Unit to a one-year deal. 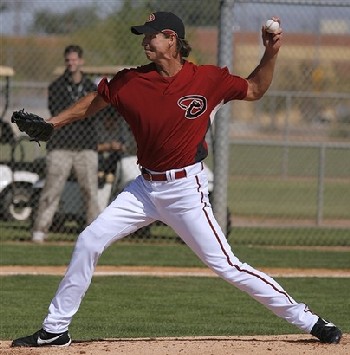 I dunno. Clearly, as last year, the Cubs are being built to "win now". But does that mean the 45-year-old, 21-year major league veteran is the answer? If the Cubs sign him, does that mean they are giving up on re-signing Ryan Dempster? (I hope not.)

Johnson did have a fine second half (5-3, 2.41 in 13 starts; in 86 innings he walked only 16 while striking out 78) for the Diamondbacks. But again, he is 45 years old; this sort of smacks of the continuing David Wells comebacks, which finally fizzled out in 2007. Johnson's back problems also worry me; if the Cubs do wind up signing him, any deal has to be heavily incentive-based (on number of starts). If he did make all his starts, maybe he does have one more year left in him. If not, you thank him and let him go. Am I advocating this? Not really -- I think there are other, better options. But neither am I slamming the door shut (although I did say "no" the other day when asked this very question in this FanPost). Reasonable minds can be changed. I'm willing to listen, at least.

Having a pitcher of this stature get his 300th win -- he needs only five -- in a uniform so foreign to his career (he is 13-0 lifetime vs. the Cubs, the only franchise he has never lost to, and that includes all five he has played for), would be unprecedented in major league history. Gaylord Perry is probably the only true itinerant who has 300+ wins, finally registering his 300th victory in 1982 as a member of the same Mariners for which Johnson first gained fame, and also remember he played under Lou Piniella for five and a half seasons (from 1993 until he was dealt to Houston halfway through the 1998 season).

So my answer now is: Maybe. Johnson has significant postseason experience, 121 innings in 19 games (16 starts), although his last three postseasons, with the 2002 Diamondbacks and 2005 and 2006 Yankees, didn't turn out so well.

Finally, in one of those "who played with whom" games that's always fun, I feel compelled to point out that in Johnson's first September callup, in 1988, one of his teammates was 43-year-old Graig Nettles, who made his major league debut 41 years ago, in 1967. In fact, Nettles' last major league at-bat was as a pinch-hitter for Johnson on October 1, 1988. The Big Unit got his first major league hit at Wrigley Field in the second game of a doubleheader on September 20, 1988; he also threw his first ML CG that day, striking out 11 Cubs in a 9-1 Montreal win (for big laffs, check out the Cub lineup and pitchers that day).

So -- let's wait and see. This would be a true outside-the-box move, and if he were a Cub, at least Johnson couldn't beat them any more.

Finally, I am in Arizona soaking up the sun for a few days. I'm planning on going to Mesa to see the AFL game on Monday. If any Phoenix-area BCB readers would like to join me there, email me so we can make arrangements to meet up.