The Cub Can Of Worms: Danny Young

Share All sharing options for: The Cub Can Of Worms: Danny Young

Some of you are saying: Who?

Danny Young, a 6-4, 210-pound lefthander who looked good in a uniform, made the Opening Day roster for the Cubs in 2000 for two reasons: first, he had made seven appearances totalling eight innings in spring training, striking out seven and allowing only two runs, and second, the Cubs and Mets were both allowed several extra roster players for their two-game opening series in Tokyo. 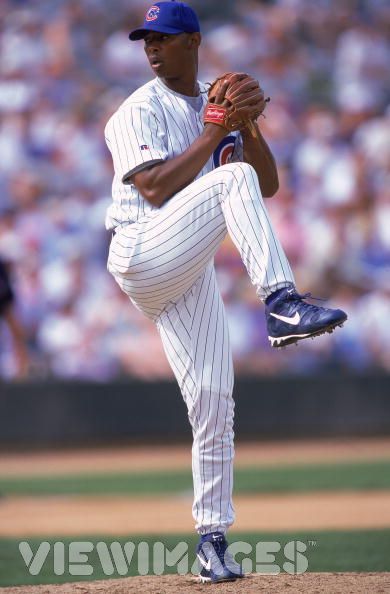 Young, one of the lowest-round draft picks to ever play in the majors, was originally picked in the 83rd round (can you imagine GM's today sitting around to pick 83 times?) by the Astros in 1990, but they didn't even bother to sign him until nearly a year later, May 10, 1991. He bounced around their system and the Pirates' for six years until the Cubs picked him in the minor league draft on December 15, 1997. He didn't throw that well in the Cub organization either, but his decent numbers in 1999 at Double-A (67 K in 60 innings and a 3.30 ERA) got him a spring-training invite in 2000.

And so, after the sort-of good spring he had in 2000, off it was to Japan for Danny, an extra lefty in the pen.

The second game there went into extra innings; six Cub pitchers, including starter Kyle Farnsworth (he would start only four more games after that one before being moved permanently to the bullpen), had held the Mets to three hits and a run over the first ten innings, while the Cubs couldn't muster any more than a single run, either.

Our man Danny took care of that: after retiring the first two hitters in the 11th inning, he gave up a single to Todd Zeile, walked the bases loaded, and then Benny Agbayani hit a grand slam.

When the Cubs returned Stateside, Danny made three more appearances, all in the first US series against the Cardinals. He had scoreless outings in the first two games, then, relieved again in a game Dr. Tightpants had started (Kyle allowed eight runs in three innings). Danny gave up three runs while retiring only one batter in a 13-3 Cub loss, whereupon he was sent to Iowa with a 21.00 ERA. He put up a 5.59 ERA in 27 appearances in Triple-A and left baseball for good.

The 2000 Cubs, losers of 97 games, were a horrid team. Expect to see more members of that squad in this series. Danny Young, who appeared in only four games, is mostly a footnote in Cub history, except for the loss he took in Japan. (I was surprised to be able to find a photo of him -- it was taken in a spring training game on March 15, 2000, a 10-4 Cub win over the Brewers. Check out the cap he's wearing and the very evident can of tobacco in his pocket.)