Why The Cubs Need Ryan Dempster

Share All sharing options for: Why The Cubs Need Ryan Dempster

Most of it is about Jake Peavy and the Braves' fruitless (so far) pursuit of him. But then the writer, Carroll Rogers, tells us this story about Ryan Dempster: 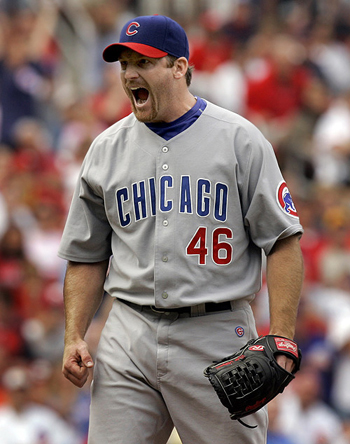 In the meantime, I throw out a personal vote for Ryan Dempster because this is my blog (for the moment) and I can say what I want. He’s still available after the deadline passed for teams to negotiate with their own free agents. My honorary cousin Phil Rogers of the Tribune says the Cubs offered him $48-$50 million over four years.

But here’s the personal part: I went into the Cubs clubhouse in spring training in 2004, unknown to most everybody in the room except for Greg Maddux, whom I was waiting to interview about spending his first spring training away from the Braves in 12 years.

And Dempster, seeing me standing there by myself, probably looking a little bewildered, came up and introduced himself. Yes, "Hi, I’m Ryan Dempster." And he asks me where I’m from and what I’m working on.

Unreal. I’m telling you, that doesn’t happen in clubhouses. You’re supposed to know who these guys are, for one thing. And I did. But what an impression that made.

See? It’s years later and I’m still talking about it, and thinking he’d make a great addition to the Braves clubhouse. And OK, OK, there’s got to be a baseball part too. Seems to me he’s on the upswing. Just put up a 17-6 season with a 2.96 ERA for the Cubs in his first year back in the rotation since 2003 with the Reds.

Laugh if you will, tell me this stuff doesn't matter. I tell you that it does matter. Good clubhouse guys aren't easy to find, and when you have one like Dempster who gets it, in addition to being dedicated to his craft and staying in shape so he can continue to perform at the high level he did in 2008, you keep him.