MESA, Arizona -- The grass was a little browner than I remembered it from last March, scorched by the summer Arizona sun.

But parking's free, and it costs only $6 to get in -- sit anywhere -- so why not? I headed over to Ho Ho Kam Park Monday afternoon to take in the AFL game between the Mesa Solar Sox (comprised of prospects from the Cubs, Phillies, Braves, Marlins and Tigers) and the Peoria Javelinas (taking their players from the Mariners, Rays, Yankees, Brewers and Reds). A Javelina, apparently, is some sort of wild pig, as shown by their logo:

Personally, I like the Solar Sox logo (at left) better.

The PA guy (not Tim Sheridan, who does the Cubs' spring games, but someone else) laid a little joke on the small assemblage when announcing the attendance: at first he said "13,297", then adjusted it to 297 (and that must have included the 15 or so scouts, both teams and the employees behind the one concession stand that was open, and though the ticket price was cheap, the food was not: full major league prices for the limited selection). Those of us enjoying the above-average 78-degree game-time temperature and completely cloudless skies saw the Solar Sox beat the Javelinas 13-6 in a game that wasn't that close -- it was 13-0 Mesa at the end of the fifth inning, and then Mesa relievers gave up three homers and six runs over the last four innings. More on this later.

I'll talk more about the Cubs involved in this game in a moment, but the story of the game was Atlanta pitching prospect Tommy Hanson, a 22-year-old, 6-6 moose of a guy who throws bullets and has a nasty breaking ball; he threw five shutout innings, allowing one hit and two walks and striking out ten. It's no wonder that the Padres spent a good portion of the last couple of weeks trying to pry him away from the Braves in the Jake Peavy negotiations. Nor is it surprising, given the talent I saw today, that the Braves said no way. Hanson, though he spent 2008 split between the Carolina League and the Southern League, might be ready for a shot at the Atlanta rotation in 2009.

The Solar Sox scored first; Matt Young, another Atlanta prospect, led off the game with a walk (there were 12 walks in all in the game, which made it drag at times); next up was the Cubs' Nate Spears. After faking a bunt, then taking a pitch: 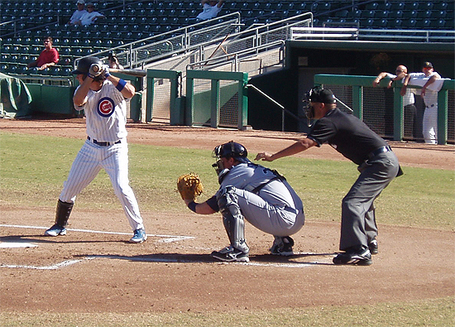 Spears swung at the next pitch, and on this swing (the catcher is faking a throw to second as the runner had taken off): 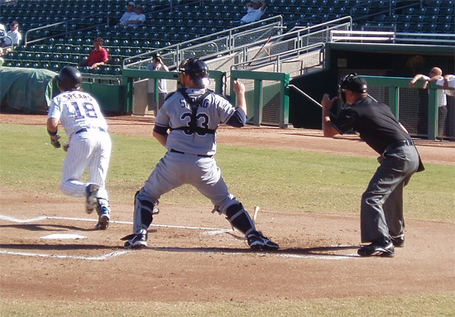 ... he smacked a two-run homer, his first in the AFL, down the right-field line. Spears later singled, struck out, walked and flied to left, going 2-for-4 with two runs scored and two RBI. Personally, I like Spears; he's hitting .338/.457/.500 and has split his time between SS and 2B almost equally during the AFL season. I am well aware cough Sam Fuld cough that AFL stats don't necessarily translate into major league success. However, I think Spears at the very least will get a spring training invite and possibly as much as being added to the 40-man roster (after the Rule 5 draft) with a chance of making the major league team as a reserve infielder.

The Solar Sox added two more runs in the third off Peoria starter Alex Periard (from the Brewers; he was less than impressive, walking four and allowing eight hits and six runs in 3.2 innings). Steve Kahn (Mariners) came in and promptly gave up a single and a walk to load the bases, and another Atlanta prospect, third baseman Van Pope, hit a grand slam to the right-field berm (sorry, Ballhawk, the berm was officially closed, although that didn't stop a couple of people from trying to run after the six home run balls hit out there -- even though they had the sprinklers going in right field most of the afternoon).

The Cubs' other position prospect who played in Monday's game was Darwin Barney, a fourth-round pick out of Oregon State in 2007. This faked bunt attempt: 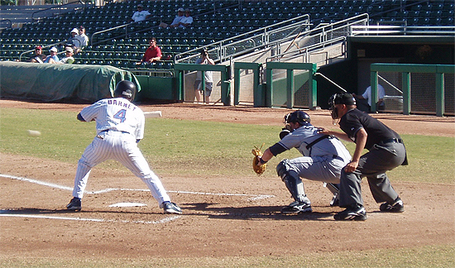 ... eventually resulted in Barney grounding into a 5-4-3 double play (on a subsequent pitch). Barney grounded out three times, popped up and walked in his five times up (he hit ninth in this DH-used game).

Cub pitching prospects didn't do very well. Rocky Roquet, rather old for this league and his level (he turned 26 two weeks ago and has never pitched above Double-A), relieved Hanson and allowed three runs (two earned, thanks to a throwing error by Spears) when Yankee prospect Juan Miranda slammed a three-run homer. All three outs recorded by Roquet were on deep fly balls. 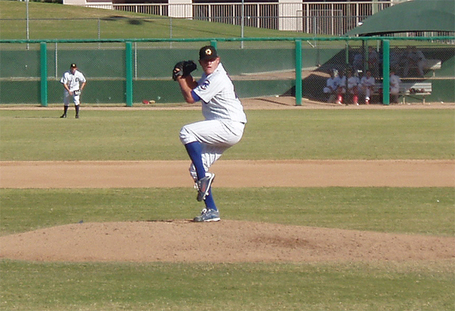 And Esmailin Caridad, who had one appearance for the major league Cubs in spring training in 2008, didn't distinguish himself, either; after retiring the first two hitters in the 8th inning on lazy popups, he issued a walk and then Miranda hit his second homer of the game. Caridad throws pretty hard for a guy his size, only 5-10, 195: 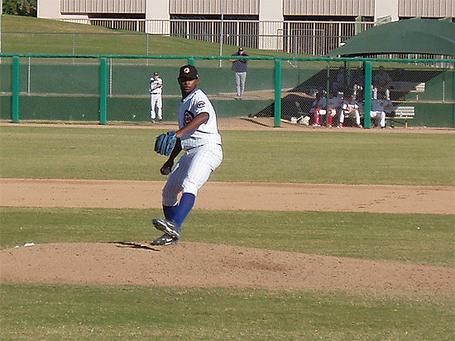 Finally, the hitting coach for the Solar Sox is someone you might recognize: 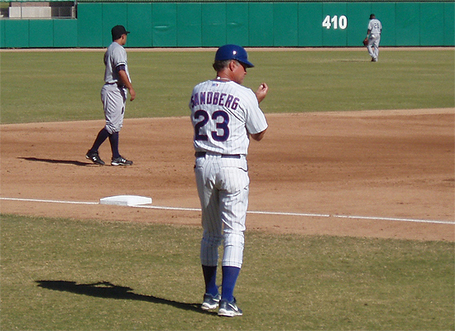 In the AFL many of the coaches and managers serve as base coaches; Peoria's manager Daren Brown (who manages Seattle's Triple-A team at Tacoma) coached third, while former Cub Ozzie Timmons coached first. For Mesa, manager Rocket Wheeler didn't coach, which left first-base coaching duties for various players who weren't in the game, and third-base coaching for Ryno. I was sitting in the first row behind the Peoria dugout and overheard, toward the end of the game, and also toward the end of his conversation, one of the Peoria coaches, who I thought I recognized, telling either one of his players or one of the other coaches -- I couldn't tell which -- that Mesa's hitting coach was "Ryne Fucking Sandberg". (There was, apparently, a reason for this reference, but I didn't catch it.) Then I figured out who uttered that profanity... Peoria pitching coach Ted Power, onetime closer for the Reds who was, briefly, in spring training with the Cubs (and I believe, Sandberg's teammate), trying to hang on in March 1994.

Baseball. Love it. Glad to have seen a ballgame in mid-November. Can't wait for spring training!