Book Review: "The Best Team Ever"

Share All sharing options for: Book Review: "The Best Team Ever"

Alan Alop and Doc Noel's "The Best Team Ever" is the novelized story of the 1907 Cubs, the first Cub World Championship team. 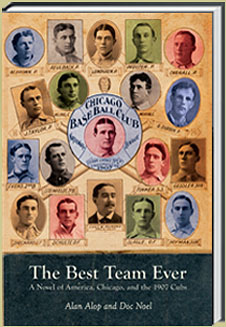 But it is so much more than that. It's told, in part, by supposed "journals" left by a rookie pitcher for that team, Blaine "Kid" Durbin, a lefthanded pitcher who got into only 11 games that year (and only five of them as a pitcher; he played the others as an outfielder). But the way the fictionalized Durbin tells the story, it's about far more than baseball. Naturally, there are stories of the best-known Cubs, Tinker and Evers and Chance, but also quite a bit about pitcher Jack Taylor (who's portrayed as a hard-drinking, hard-swearing prankster), Johnny Kling (who held out until almost the time the season started, after which Chance was so mad at him that he barely let him play till May, explaining his total of only 104 games played), and many others.

In addition to well-researched descriptions of baseball in that era -- I especially liked the authors' use of period terminology (among those: calling spring training the "Practice Season", and calling what we would term a .356 batting average "356 percent") -- there's a parallel story of what living in Chicago was like in 1907. We meet many lowlife characters who haunted the city's many saloons and brothels, and there's a story of a young woman who is making her way to Chicago from Iowa to make a new life after all her family dies, who is kidnapped and forced into prostitution. Both real and fictional characters inhabit this part of the story, seamlessly weaved into what becomes not only a thriller, but a love story.

It begins before the season even starts, with Durbin meeting Cubs owner Charles W. Murphy in his ornate downtown Chicago office to sign a contract (for more money than Durbin, who was from a small town in Missouri, could have imagined). It takes you through the "Practice Season", which was held in those days at the West Baden Resort in French Lick, Indiana -- not much warmer than Chicago, based on the narrative. The team travels through various cities playing exhibition games with the local teams -- remember, in 1907 you likely had never seen a major league game unless you lived in one of the ten major league cities (Chicago, New York, Philadelphia, Boston, Detroit, Cleveland, Washington, Pittsburgh, Cincinnati and St. Louis), and teams frequently did trips like this "coming north" from spring training, even as late as the 1960's. They also played exhibition games during the season for extra money; the novel tells of the Cubs playing a black team, the Leland Giants, and some repercussions from that in those less-enlightened days, and has quite a bit about the World Series and how the Cubs approached playing against Ty Cobb, someone most of them had never seen play before that October. You'll find out about how players in that era, much rougher men than the ones who play today, routinely cheated on the field, largely because most games were umpired by only one man, who couldn't possibly see everything.

The story also involves another real-life celebrity from that era, a traveling magician named Howard Thurston; I'll leave it to you to find out how he was involved, and how it ends up. I highly recommend this novel to anyone interested in Cub, baseball, Chicago or American history. It's fiction, true: but realistic enough that it gives an excellent portrait of what life, and baseball, was like 101 years ago.