The Cub Can Of Worms: Fred McGriff

Share All sharing options for: The Cub Can Of Worms: Fred McGriff

This FanPost titled "Fred McGriff to the Cubs?" from a few days ago, in which digitalbenjamin asked everyone to post what they thought were the Cubs' worst acquisitions, inspired me to open the Can of Worms about Fred McGriff himself -- a player who put up significant numbers, yet in some ways it seemed he was never even here. 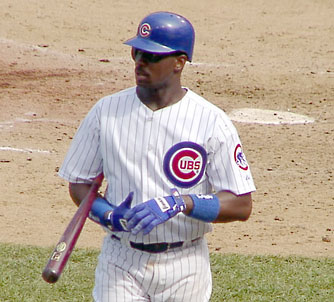 In 2001, the Cubs decided to cut ties with Mark Grace after, supposedly, Grace refused to take a lesser role and mentor Hee Seop Choi, the organization's top first base prospect at the time. Choi clearly had talent, but at the end of the 2000 season was only 21 years old and had played only 36 games above A ball -- probably at least a year, maybe two, from being major league ready. He had only 13 spring training at-bats before being reassigned back to the minor league camp.

To hedge their bets, the Cubs acquired Matt Stairs and Ron Coomer in the 2000-2001 offseason, and both saw time at first base during the first half of the 2001 season, along with Julio Zuleta, whose biggest contribution was lightening up the atmosphere in the clubhouse. After a 4-0 loss to Arizona on May 18, Zuleta decided to take a page from the movie "Major League":

"It worked," Zuleta said. "I put the bat bone (rubbed on bats to smoothen them) in the middle of a plate and put a banana and apple and orange around it. Then I got some Flexall from the trainers and ... some newspaper and burned it. I made it up as I went along. The bats got hot and everyone started hitting."

Whatever the reason, the Cubs won 12 in a row after Zuleta's "ritual" -- their longest winning streak since 1945. And Zuleta's own bat went cold, resulting in him being sent back to the minors -- for good -- on June 26.

Still, even though they were in first place all of June and into July, GM Andy MacPhail insisted they needed to upgrade at 1B. Stairs and Coomer were doing a good job, but Good Ol' Andy set his sights on Fred McGriff, then playing for his hometown team in Tampa.

The deal took more than three weeks to finish. McGriff had a no-trade clause and let it be known that he didn't want to leave his family in Tampa, thus giving rise to a nickname among some of us in the bleachers: "The Family Man". Then we heard he didn't want to play in all the day games at Wrigley Field... new nickname: "The Prince of Darkness".

Finally, on July 27 the deal was done (maybe this was a precursor of how hard MacPhail would be to trade with once he became Baltimore's GM). The Cubs sent Manny Aybar and a PTBNL (who turned out to be Jason Smith) to the then-Devil Rays for McGriff, whose first Cub game was a nationally-televised ESPN game on Sunday night, July 29. He took the field to a huge ovation and walked, singled and scored a run in 7-5 Cub win.

And... the team fell right into the tank. Standing 60-43, 3.5 games in first place when The Family Man took the field for the first time, the Cubs went 28-31 the rest of the way and finished third, even though McGriff's numbers with the Cubs were almost identical to what he had put up in Tampa (lower BA, but higher SLG).

The next year, McGriff again hit reasonably well, but the Cubs were awful, losing 95 games and finishing last, and rather than put Choi, who had been recalled in September, in the lineup every day to see what he could do, interim manager Bruce Kimm left The Prince of Darkness in the lineup. Why? To give him a shot at his 10th 30-homer season. After Fred finally hit this milestone blast (in a 5-4 loss at Pittsburgh on September 22, nine days after hitting his 29th and a full month after his 28th), he made only one token PH appearance the rest of the year, closing a sorry chapter in Cubs history. The Cubs were 95-126 with McGriff on the roster.

Oh, and The Family Man? Where did he go after leaving the Cubs via free agency after the 2002 season?

Los Angeles, more than 2,500 miles from home. He left the Cubs with 478 career homers, at age 38. But he slumped in LA, was benched and finished 2003 with 13 HR. Going home again to Tampa, where he hoped to reach 500 HR with his hometown team, he hit .181 with 2 homers in 27 games and was released on July 28, 2004, seven homers short of 500 and probably forever short of the Hall of Fame induction he thought he would clinch with that milestone homer that never happened.

Good, I say. McGriff's lackadaisical attitude with the Cubs makes most of us wish he had never been one. He did play in five postseasons and has a ring from the 1995 Braves, and put up good postseason numbers (.303/.385/.532 with 10 homers in 188 AB) -- but I'd be hard-pressed if you asked me to remember any one of them..