The Cub Can Of Worms: Oscar Zamora

Share All sharing options for: The Cub Can Of Worms: Oscar Zamora

If you're not old enough to remember, Oscar Zamora was a smallish (5-10, 178) righthanded reliever for the mediocre-to-bad Cub teams from 1974 to 1976. A native of Cuba, he languished in the Cleveland and Houston farm systems for nine years, and was purchased by the Cubs on June 17, 1974 and installed as a sometime middle reliever, sometime closer (though closers in those days had different roles than today, often going two or three innings). 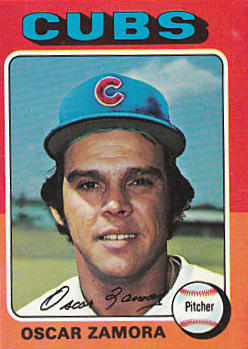 But the next season and in '76, even though the team was a bit better, Oscar was awful, posting ERA's north of 5 each year (and in June '75 alone had three horrendous outings on June 4, June 13, and June 25, those three accounting for more than 25% of all the earned runs he allowed that year). This led to the little song you see at the top of this post being sung by many fans.

He wasn't any better in 1976. In early August manager Jim Marshall ran a bit short of pitchers when the Cubs had back-to-back doubleheaders in Montreal (due to two rainouts in May), so Oscar was pressed into service as a starter in the second game on August 7. He got pounded for eight hits and six runs in less than three innings, was sent to the minors and eventually signed as a free agent with the Astros, for whom he had 10 bad appearances (7.20 ERA) in 1978 and then was done.

But I'll bet you didn't know -- I didn't till I started looking for more background on Oscar for this post -- that he threw a perfect game in the minor leagues, for Triple-A Oklahoma City against Denver. No, I'm not making this up. It was a seven-inning perfect game, the second game of a doubleheader. Oddly enough, it was on the same day -- September 2, 1972 -- that Milt Pappas came one strike away from perfection for the Cubs. Several future major leaguers were on the Denver team that Oscar threw the perfecto against, including Pete Mackanin, Jeff Burroughs and future Cub Lenny Randle. (The "Steve Greenberg" listed in that boxscore is Hank Greenberg's son, who eventually founded Classic Sports Network, later sold to ESPN, and CSTV.)