The Cub Can Of Worms: Mel Rojas

Share All sharing options for: The Cub Can Of Worms: Mel Rojas

This is a cautionary tale that has a happy ending. First, searching for images of Mel wearing a Cubs uniform -- his tenure was so bad in Chicago that I couldn't even locate a decent one, so enjoy this picture of him in Expos garb. 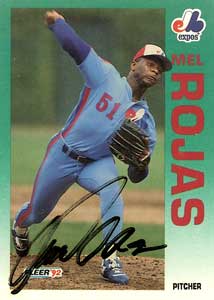 The caution, of course, is "Don't assume that by signing an 'established' closer, that you're actually going to get someone good". During the 1990's, the Cubs did this time and time again; before Rojas was signed on December 10, 1996 they had done it three other times: with Dave Smith before the 1991 season, with Randy Myers before the 1993 season and with Doug Jones prior to the 1996 campaign. Only Myers had any success on the North Side -- the others were horrid.

You wouldn't have guessed that Rojas was about to stink the joint out, either; he had just turned 30 and had two good years closing in Montreal. In 1996 he had 36 saves with a 3.22 ERA and struck out 92 in 81 innings, walking only 28 and allowing only five homers.

The 1997 season started and as soon as you could say "jimriggleman", came to a screeching halt. The Cubs lost a NL-record 14 straight games to start the year; Rojas didn't even get a save opportunity till the season's 19th game. He blew that one, giving up two 9th-inning runs to turn a 3-2 Cubs lead into a 4-3 loss. OK, so the winning run scored on an error; maybe it wasn't all Mel's fault.

It got worse. By June 5 he had five saves -- and four blown saves; the June 5 blown save was particularly spectacular. With two out and two on in Philadelphia with the Cubs leading 8-5, Rojas served up a three-run homer to Mike Lieberthal; the Phillies won in the 10th. After managing to save four games at the end of June and beginning of July, he gave up another three-run homer in the ninth inning with two out on July 15 at Wrigley Field, this one to Houston's Bill Spiers, turning what looked like a 3-2 Cubs win into a 5-3 loss. By the time he blew another lead on July 30 in Atlanta, by giving up two consecutive hits after a leadoff triple and an out, he had been getting regularly booed every time he appeared on the field at Wrigley.

You can justifiably criticize Ed Lynch for most of his tenure as Cubs GM -- but in dumping Rojas, Brian McRae (who had also worn out his welcome in Chicago after two decent years in 1995 and 1996) and Turk Wendell to the Mets, Lynch made his best deal as GM, and acquired two players who played key roles in the 1998 wild card year: Lance Johnson, who did decent work as a platoon CF, and Mark Clark, a serviceable inning-eater (sort of the Jason Marquis of his time). So, Mel's acquisition did have a happy ending, from a Cubs point of view, at least.

Meanwhile, Mel got even worse in his very first game as a Met on August 9, 1997. Entering a 3-3 tie with Houston in the top of the 9th, Mel gave up a triple, single and walk before he got anyone out; after another single, Jeff Bagwell hit a three-run homer off him. His Mets ERA (5.13) was even higher than his Cubs ERA (4.42). After an even worse year in 1998 (6.05 ERA, 1.69 WHIP), the Mets somehow managed to get the Dodgers to take him in exchange for Bobby Bonilla, who was also nearing the end of a good career. Mel threw 14 innings for three teams (the Dodgers, Tigers and Expos) in 1999 with an 18.00 ERA and was done.

Lynch signed one more "established" closer -- Rod Beck, who did a good job in 1998, but got hurt and was traded before the next year was over. After that, Rick Aguilera was acquired by trade and also stunk; Tom Gordon did an OK job for the year and a half he was a Cub, and the next closer who was successful after that was Joe Borowski, who had been rescued from the scrap heap.

All of this is one more reason to keep Kerry Wood. Homegrown. Had a good year. Isn't too old. His arm seems sound. Bring him back.