The Cub Can Of Worms: Kyle Farnsworth

Share All sharing options for: The Cub Can Of Worms: Kyle Farnsworth

Dr. Tightpants (named for how he wore his uniform trousers). Heartthrob of Lincoln Park Trixies. Owner of a million-dollar arm that could throw a baseball 100 MPH. And owner of a ten-cent brain that prevented him, most likely, from becoming an elite closer.

Farnsworth first came to the majors with the Cubs in 1999, and was put into the rotation for that really bad team. He made 21 starts that year, and on August 29, 1999, he threw a two-hit shutout against the Dodgers in Los Angeles (oddly, the two hits, both singles, were made by future Cubs: Mark Grudzielanek and Todd Hollandsworth).

The next year Farnsworth was moved to the bullpen and struggled again, posting a 6.43 ERA. But in 2001 he started to dominate, striking out 107 batters in 82 innings and his ERA dropped to 2.74. This started a strong alternate-year pattern which lasted through 2006 -- good in the odd-numbered years, bad in the even-numbered years. 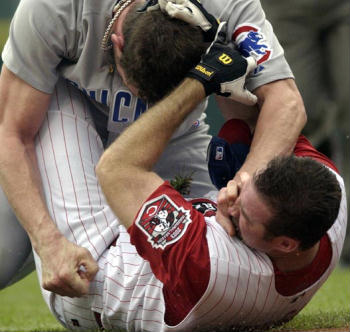 But he had a reputation for being a late-night partier, hanging out in one bar that stayed open till 4 am, and supposedly was caught sleeping in the clubhouse one day in 2002 when interim manager Bruce Kimm was looking for him to pitch. If memory serves, this is the game in question -- Kyle came in and faced five batters, walking three of them. The Cubs won the game anyway.

It was the next year that Dr. Tightpants endeared himself to Cubs fans forever. On June 19, 2003, in a game vs. the Reds at Cincinnati, Kyle threw an inside pitch to Reds pitcher Paul Wilson, who was trying to bunt. Wilson started yelling at Farnsworth, and the result was a bloody takedown by Kyle.

The Cubs lost the game, but Farnsworth won over fans who had previously been up and down about him because of his up and down pitching. The following year, Farnsworth turned on a fan and kicked it. I say "it" because the fan in question was one used to cool down the dugout. That came after this massive meltdown against the Astros on August 27, 2004. He sprained his knee and spent a month on the DL. (He had, earlier in the season, hurt himself and missed a couple of games fooling around kicking footballs around the Wrigley Field outfield. Maybe he should have tried the NFL as a career.)

That tantrum, along with a pitching meltdown in the disastrous eighth inning of game six of the 2003 NLCS, got him sent out of town -- traded to the Tigers for the guy many of us called "Spanish for Kyle Farnsworth", Roberto Novoa (and also Scott Moore and Bo Flowers). Kyle's tenure in Detroit lasted four months; he was traded to Atlanta at the 2005 trading deadline, but not before showing off his pugilistic skills again on July 17, 2005, a game he wasn't even pitching in.

Here's the description from the Retrosheet boxscore linked above (Kyle's in this photo, hidden behind the Royals' Jeremy Affeldt): 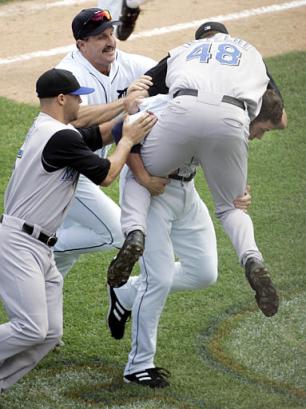 TIGERS 6TH: Guillen was hit by a pitch; the second pitch hit Guillen's helmet; Guillen yelled at Hernandez and the two charged each other; both benches and bullpens cleared; no punches were thrown and it appeared to be over when Farnsworth charged Affeldt and threw him to the ground; KC ejections: Runelvys Hernandez, Emil Brown, Alberto Castillo, Mgr Buddy Bell; Detroit ejections: Carlos Guillen, Jeremy Bonderman, Kyle Farnsworth

Two weeks later, Farnsworth was traded to Atlanta. After the 2005 season, he signed a three-year deal with the Yankees worth $17 million. His production was poor -- ERA's over 4 all three years -- and by the middle of 2008, the Yankees had had enough, and shipped him back to the Tigers. He's currently a free agent, and with the 100 MPH fastball no longer there, turning 33 in April, Farnsworth may not find too many suitors ready to sign him, except maybe for WWE.

If only he'd had a brain to match that arm.