Today is the deadline for major league teams to offer arbitration to their free agents -- 10:59 pm Central time, specifically, so we may not hear specifics till tomorrow. 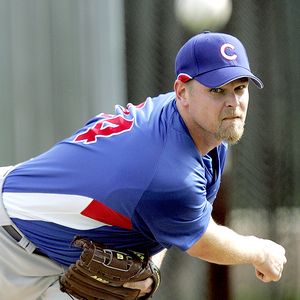 So does Kerry Wood get offered arbitration? Yes. No. Maybe. You can bet that if he is offered arb, he'll accept -- and don't assume that's a budget-breaker, either. Wood wants to remain a Cub -- we all know that. It's more than possible he'll take less than an arbitrator would award to do so. The deadline for Wood to accept arb, if offered, is next Sunday, December 7.

What will be more interesting to see is whether other players, particularly, as noted in Ken Rosenthal's article above, Adam Dunn, are offered arbitration. It's possible the Diamondbacks will want to keep him; we'll see after today.

Other Cub rumors are summarized neatly in this Dave van Dyck article, in which he says, basically, nothing's happening right now and isn't likely to until the winter meetings get under way next week.

Use this thread for arbitration and trade discussion today. I'll update the post with any new information if it comes in during the day.