Among the colorful language used in the complaint filed against Gov. Rod Blagojevich yesterday (link opens .pdf file) were the words of the governor's wife Patti, who is alleged to have been heard in the background, while Rod was on the phone discussing ways to get back at the Tribune for writing negative editorials about him, saying:

Now, normally I don't like using profanity on this site, but obviously, that isn't me saying it, and I think it's important to see the cavalier attitude taken by both Blagojeviches on the issue of the Cubs sale -- particularly since Rod claims to be such a big Cubs fan. (I guess Patti isn't. And Rod ought to have his Cub fan credentials revoked.) 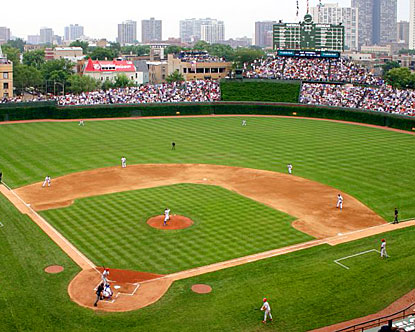 I bring this up because in today's Sun-Times, there appeared an article claiming that the Illinois Finance Authority is still interested in buying Wrigley Field, and its chairman William Brandt is quoted in the article:

Monday? The day before Rod was arrested? This wasn't a good idea in the first place and it's an even worse one now, with state government in turmoil. Let's hope that the "at least" three buyers who have put in bids for the Cubs as of late November, have bids in for both the team and the ballpark. There's no doubt that Wrigley Field does need renovations to keep it going for the near and far future, but we don't need state government involved, especially after yesterday's revelations.