The Cub Can Of Worms: Lenny Harris

Share All sharing options for: The Cub Can Of Worms: Lenny Harris 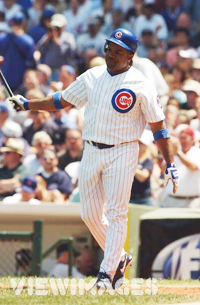 He started out fine -- on April 30 he was hitting .250/.280/.417, down a little from 2002 but nothing to be alarmed about. But then Dusty's first little obsession -- with bad hitters that became "his horses" -- started to show. He began to start Lenny at third base, despite the fact that he had the mobility of a statue and hadn't played third base on a regular basis since 1991. Between May 1 and the time he was finally released on August 2, he started 23 games at 3B -- including two after Aramis Ramirez was acquired from the Pirates. During that time he "hit" .168/.250/.187, which is to say, he might as well have just sat on the bench and announced "You can have another out, I'm just going to stay here and conserve energy."

Lenny, though, got the last laugh. Nine days after the Cubs let him go, he signed with the Marlins. Jack McKeon outsmarted Dusty Baker in the playoffs, and he knew how to use Lenny -- as a pinch-hitter. For Florida, Harris played in 13 games -- all but one as a PH. That one was a start in right field the day after the Marlins clinched their playoff spot. Apart from that start, he played in the field two other times, remaining in LF after pinch-hitting in two blowouts, one a win, the other a loss.

Had Dusty Baker known how to use Harris -- as Davey Lopes and Jerry Royster had done in Milwaukee in 2002, mostly as a PH, starting him occasionally in the outfield and rarely at 3B, he might have stuck around and contributed in the postseason. Instead, he got a World Series ring... for the Marlins.