The Cub Can Of Worms: LaTroy Hawkins

Share All sharing options for: The Cub Can Of Worms: LaTroy Hawkins

With the great majority of Cubs fans puzzled and/or angry that Kerry Wood wasn't offered arbitration yesterday, I figured it was time to open the Can and let LaTroy Hawkins out, just to remind all of you that things could be a lot worse.

And though I know most of us don't have any good memories of a player some called "LaToya", let's also remember that his failures as a Cub, while monumental, in many ways weren't his fault. 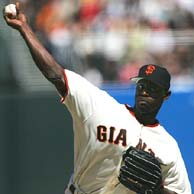 Best forgotten as a Cub, here's
LaTroy pictured during his
half-season in San Francisco

What do I mean by this? Hawkins was signed as a free agent after the 2003 season, following one good and one outstanding year as a setup man for Joe Nathan with Minnesota. In fact, Hawkins was likely the best non-closing reliever in the majors in 2003 -- he had a 1.76 ERA in 74 appearances comprising 77.1 innings. He allowed only 5 homers, and struck out 75 and walked only 15.

It all would have worked out fine if Joe Borowski hadn't gotten hurt early in the 2004 season. And when that happened, Dusty installed LaTroy at closer, despite ample evidence that Hawkins wasn't suited to close. In his last full year of closing at Minnesota, he put up 28 saves -- but had nine blown saves and an ERA of 5.96, with 39 walks and only 36 strikeouts in 51.1 innings. The next year, 2002, the Twins installed Eddie Guardado at closer; he saved 45 games, Hawkins was good setting him up and perhaps not coincidentally, the Twins improved by nine wins and won the AL Central.

Perhaps Dusty didn't have a whole lot of other choices in 2004. Kyle Farnsworth was on the 2004 Cubs, but his better days were already behind him. Michael Wuertz was a rookie, and we know that Baker would never have entrusted the closer role to a rookie. Ryan Dempster was still rehabbing from an injury -- though, when he was activated in August, he made 23 relief appearances with a decent 3.92 ERA and two saves. So LaTroy was given the job fulltime in early June. He did OK up till September, when he blew two critical games in the season's final week, and about that, enough said, I think -- no need to relive that. He finished 2004 with nine blown saves -- turn around five of those, and the Cubs win the wild card.

Despite calls from everyone from bloggers to sportswriters to Jim Hendry for Dempster to be installed at closer, Dusty insisted that LaTroy could do the job in 2005. Dempster began the year in the rotation, and Hawkins blew four saves by May 13, at which time Dempster was given the closer role. The third of the four blown saves is the one all of us will remember forever -- it happened on May 6, 2005. In the top of the ninth, with the Cubs leading the Phillies 2-1 -- on a Derrek Lee two-run homer off Billy Wagner in the last of the 8th -- Hawkins gave up two singles, then got Ryan Howard for the first out. Jose Offerman then batted for Marlon Byrd. Earlier in his career Offerman had put up decent OBA's (96 walks in 1999) but by this time he usually hacked at everything.

Hawkins walked him, loading the bases. The next batter, pinch-hitter Placido Polanco, hit a screaming line drive right back to LaTroy. The runners had broken with the crack of the bat. LaTroy had Offerman caught off base. He threw to D-Lee. Game over, right?

Wrong. Hawkins' throw hit Offerman in the helmet. If he had tried to do that 999 more times, he couldn't have done it again. The ball ricocheted into the right field corner, two runs scored and the Cubs lost 3-2.

That was it for Hawkins in the eyes of me and most other Cubs fans. He began to be booed unmercifully, and even louder, in his next appearance on May 9, he gave up a homer to the Mets' Doug Mientkiewics that broke a 4-4 tie and cost the Cubs another game. By the end of May, Hendry had to ship him out of town; somehow he got the Giants to take his contract. In return the Cubs got Jerome Williams, who seemed to have potential but who was last seen in the Dodgers' farm system in 2008, and David Aardsma, who brought Neal Cotts to the North Side, so at least there's still someone on the roster as a result of the Hawkins signing, which happened five years ago tomorrow.

Interestingly, once the Astros got Hawkins last August, he was outstanding -- an 0.43 ERA in 24 games and only 5 walks, in a setup role. The Astros re-signed LaTroy for 2009. But... Lou says he's looking for another right-handed reliever. You don't suppose...

Nah. Too terrible to contemplate.