Since we all have had a lot of fun with the Help Me ID This Mystery Cub post made by Andre Fonseca a couple of days ago, I thought I'd start an occasional series of "Name That Cub". (This was also suggested in the comments, thanks for the idea!) 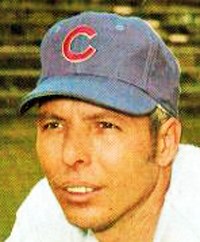 No prizes for this, just for fun.

No clues as to when this man played for the Cubs, although it probably won't be too hard for you to figure that out. I won't give you any clues as to what he did while he was a Cub, either, nor his position. Here are your only pieces of information to go on: