The Case For Adam Dunn

Share All sharing options for: The Case For Adam Dunn

The last time I posted a "case for", last May promoting the idea that the Cubs should reacquire Greg Maddux, I was vilified by some for suggesting it. After the fact, though, wouldn't you say that Maddux would have looked real good going in to Game 1 of the Division Series throwing strikes to the Dodgers after Ryan Dempster couldn't?

Anyway, that isn't the point of this post. The point is to put forth my case for the Cubs signing Adam Dunn as a free agent. Now, you might say -- hey, Al's been against this before. And you'd be right. I've worried about his defense, which is bad in left field, and at least in theory, the Cubs would be signing him to play right field. But since Lou is obsessed with acquiring a left-handed power hitter, and since Dunn is one of the best LH power hitters in the game, the increased offense would be enough that we could live with the ugly defense. Think of Dunn as a nicer, left-handed Dave Kingman with more walks.

Further, there is at least the possibility that Lou could think outside the box enough to convince Alfonso Soriano to move from left field to right. Granted that Sori's defense in left field isn't much better than Dunn's, bunny hop and all, but Soriano definitely has the arm for right field. If the Cubs are going to have two mediocre-to-bad defensive players in the corner spots, at least put the guy with the best arm where it's needed most. Putting Dunn in LF and Soriano in RF would mean that the plan to platoon Kosuke Fukudome and Reed Johnson in CF would be put in place. That would make a good combined offensive CF, plus at least give good defense in the middle -- those guys might get tired chasing down all the balls Soriano and Dunn can't get to. Finally, the signing of Joey Gathright at least gives the Cubs someone they can slide in for defensive purposes -- or put in as a pinch runner for Dunn after he walks in the late innings, and then remain in the game. 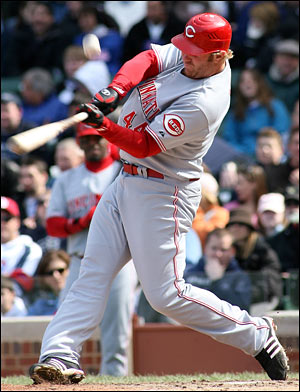 Dunn hits a lot of home runs-- oddly, exactly 40 each of the last four years -- but a large portion of his offensive value comes from all the walks he draws. To give you an example of this value, consider this: since 1912, when Jimmy Sheckard drew 122 free passes (he had set the club record with 147 the year before), a Cub hitter has walked 100 or more times in a season only five times:

That's it. Five times in 96 seasons. Adam Dunn has accomplished that feat six times in the last seven seasons, and he would have done it a seventh time (in 2003) had he not missed 46 games due to injury.

Last year, Fukudome helped turn the Cubs on to the idea that walking is good. They nearly set a club record for walks -- the 636 drawn was only 14 short of the record set in 1975 -- can you imagine how many they'd draw with Dunn in the lineup in between Derrek Lee and Aramis Ramirez (if that's the way Lou decided to go)? The Cubs led the NL in runs scored, by a wide margin, with 855 in 2008. They'd score well over 900 runs with Dunn in the lineup.

Plus, he's healthy -- something another possibility for this position, Milton Bradley, is not. Dunn, as noted, missed 46 games in 2003 -- but apart from that has played at least 152 games in every season since he became a fulltime regular in 2002. I'd expect him to continue that as a Cub, at least if he could stay away from crashing into the bricks and ivy on the outfield walls. A bit of training to become accustomed to that would probably solve that issue.

Dunn has, in recent weeks, apparently told friends he'd love to play for the Cubs. Maybe that'd allow Jim Hendry to sign him to a somewhat below-market contract -- something along the lines of three years for $30 million, or four for $40 million. Fangraphs has his value a bit higher, but maybe the Cubs can negotiate a better deal, presuming the Cubs are his first choice.

If the Cubs are going to go the free agent route for that left-handed hitting OF that Lou craves, this seems the best option, since the other choices (Bradley, Bobby Abreu) are either older, injured or both. They'd probably have to clear Jason Marquis' contract, or part of it, to give some payroll room. For Dunn, I think it would be worth it. He's 29 years old, still in his peak years, and after Derrek Lee's deal expires following the 2010 season, Dunn could be moved to first base (or even spell Lee at times for the next two years). And if you need yet another reason to like Dunn, check out this rant that our old buddy Marty Brennaman recently had about him. (Marty really ought to retire -- even his own son told him to calm down during that tirade.)

Do it, Jim Hendry. Let all of us have the Big Donkey slamming homers onto Sheffield wearing the blue pinstripes.