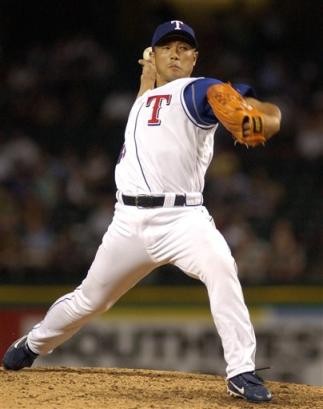 This Daily Yomiuri article (don't bother unless you can read Japanese) says that former Rangers reliever Akinori Otsuka, who had elbow surgery a year ago, is going to work out for all 30 teams in Arizona next month.

Here's a bit more detailed analysis, including suggestions that the Padres (for whom he pitched in 2004 and 2005) and the Mariners (he apparently has great respect for Don Wakamatsu, their new manager) might be front-runners for his services.

He's 37. He's been out of baseball for a year. But he was an effective reliever from 2004-2007. He was a teammate of Kosuke Fukudome's at Chunichi in 2003, so they have at least a professional relationship. Given his age and his injury history, he'd probably not be very expensive.

Worth a flyer if the Cubs could pry him away from San Diego or Seattle? I'd say yes.

What say the rest of you?