The Cub Can Of Worms: José Macίas

Share All sharing options for: The Cub Can Of Worms: José Macίas

Here's another recent player for whom we can say, for the most part: it wasn't his fault.

Jose Macias was 30 years old and two years removed from an almost-league-average (91 OPS+) season with the Tigers in 2001, where he had stolen 21 bases and hit .268/.316/.391, when the Cubs acquired him from Montreal for a minor leaguer named Wilton Chavez. You might have been forgiven if you'd have thought he could have made a decent defensive replacement/pinch runner for a year or so, the 25th guy on the roster. 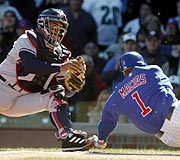 As I said, most of this is not Jose's fault. He was, as were many of "Dusty's horses", used in ways that weren't suited to their abilities. I'll close this Can of Worms post on a positive note -- Jose will always have a place in Cubs lore, because on September 28, 2005, in a 3-2 loss to the Pirates, he hit the last home run that ever landed in the old Wrigley Field bleachers, before they were torn down after that season and renovated. It was the only homer he hit in 2005 and the last of his major league career; in 2006 he went to play for the Nippon Ham Fighters in NPB's Pacific League, where he hit .229/.264/.344 with 1 HR in 227 at-bats. His final baseball stop was in the Brewers' system; he played for their Triple-A Nashville affiliate in 2007.

Thankfully, the Cubs now have a manager who doesn't use guys like this in roles they aren't suited for.