The Case For Milton Bradley

Share All sharing options for: The Case For Milton Bradley

Since the reports by WGN's David Kaplan last night that the Cubs may be "close" to announcing a multi-year deal with controversial outfielder Milton Bradley, I thought, given that you all know my opposition to this move, I'd at least try to make a case as to why this might work out OK. 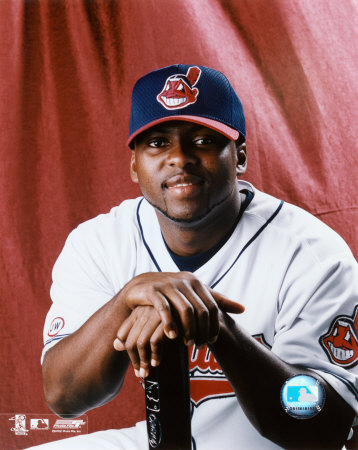 Milton Bradley first came on the major league radar when he was playing Double-A ball for the Harrisburg Senators in 2000, the Montreal Expos' affiliate in the Eastern League. He hit .329/.388/.526 with 12 homers in 87 games -- not too far off from his production with the Rangers in 2008, extrapolated to the 126 games he played for Texas last year. Traded to Cleveland in an ill-advised deal for the long-gone Zach Day, he never did break into the Indians' lineup full-time -- the most games he played there was 101 in 2003. A lot of that was due to injuries, and that's the first thing I worry about when it comes to Gameboard (seriously -- didn't this family know about the game company when they named him?). Here's a list of all his injuries -- and in the box below, I eliminated everything in his transaction report except injury-related missed time, beginning with his first one-year, major league deal with Cleveland:

OK, I left two short suspensions in that list, one by his team (the Dodgers), one MLB suspension. That's a reeeeeaaallly long list of injury-missed time, wouldn't you say? In between those injuries, Bradley has produced, particularly last year, when he put up a 163 OPS+ and led the AL in on-base percentage with .438. That's something that I found appealing when I put the case for Adam Dunn on this site last week -- and if Bradley, who has shown good plate discipline since he became a major league regular several years ago, could keep that up as a Cub, that makes him a fine addition to a lineup that exhibited that sort of patience last year, partly, I would argue, due to the influence of Kosuke Fukudome, who led the team in walks with 81 even while slumping the whole second half.

Bradley drew 80 walks while missing 36 games. If we knew he could stay healthy for the entire season -- something he has not done in the last six years -- I'd say he'd be worth the signing, even with the rest of the baggage he brings. You can't ignore this baggage; the smiling photo above sometimes turns into this: 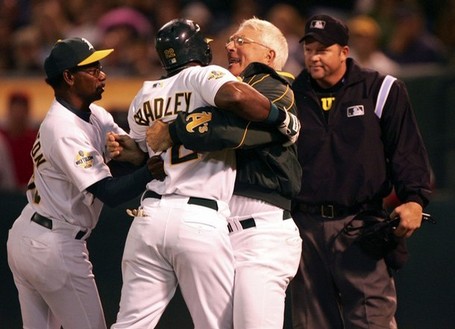 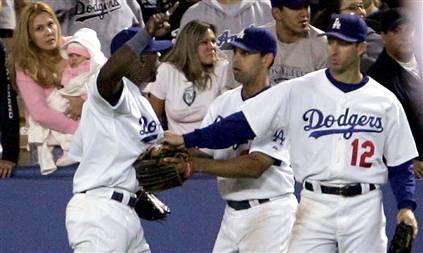 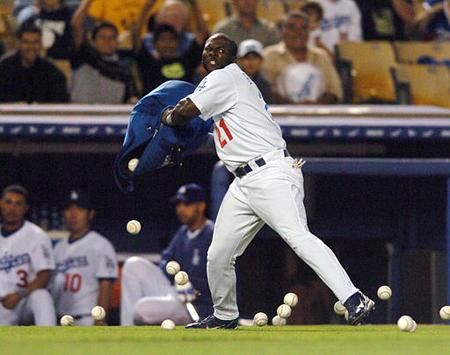 And this bizarre sequence, which might have cost the Padres a playoff spot in 2007: 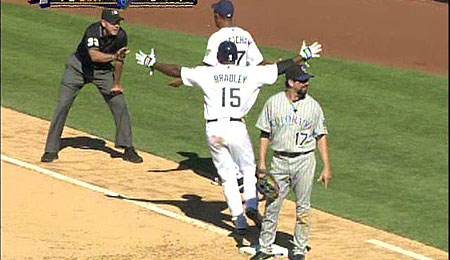 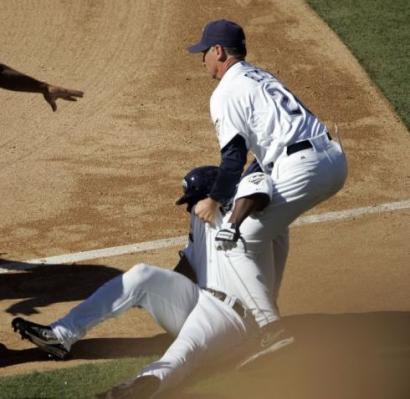 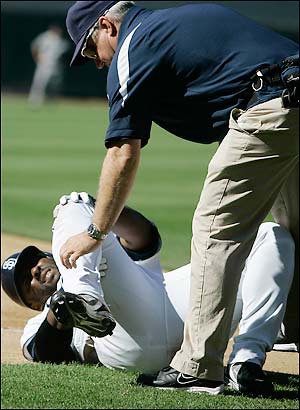 I'm trying not to make that big a deal out of these incidents. But they cannot help. In some cases (the San Diego incident) they have led to injury -- the knee injury that he suffered that day had to rob him of much of his speed (he stole only five bases in 2008 and played only 19 games in right field, the position the Cubs would want him to play). It's the injuries more than the anger that I worry about. If you're going to pay a free agent like this the money he's going to be asking for (likely in the 3-year, $30 million range), you've got to make certain that you're going to get fulltime production out of him. What's the point of paying that much money and having him out for a third of the season? That would mean that someone like Joey Gathright is going to get far more at-bats than any of us would like.

By many accounts, Bradley has been a good teammate and well-liked in the clubhouses he has inhabited. That's a positive thing; if he can be just "one of the guys", and keep the temper under control, and avoid that long list of injuries -- there is no doubt that when healthy, he can and does produce. I realize that this "case for" doesn't really read that way, and I'm still leery of the Cubs signing him. I still think there may be better alternatives, including Dunn and Bobby Abreu (who has played 150 or more games for 11 straight years). If the Cubs do sign him, I'll be rooting for him to stay healthy, calm and productive.