The Cub Can Of Worms: Neifi Perez

Share All sharing options for: The Cub Can Of Worms: Neifi Perez

This one ought to give you enough to talk about as we wait for the Winter Meetings to get underway next week.

Neifi Perez was signed by the Cubs on August 19, 2004, two days after he was released by the San Francisco Giants; despite playing for the team that then-Cubs manager Dusty Baker had managed for a decade, Neifi had never played for Dusty before. 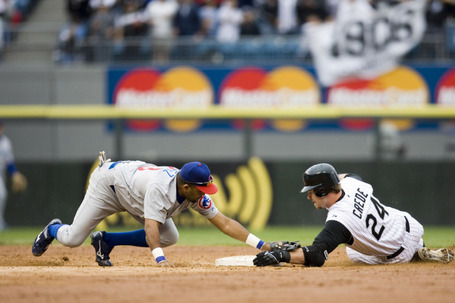 This one sums up Neifi well. Trying to tag Joe Crede in 2006,
it looks like he got him, but we'll never know for sure.

He played ten games at Iowa (hitting .206), and when recalled in September, he played a number of games at SS after the also just-acquired Nomar Garciaparra had suffered a minor injury. In 23 games, comprising 63 at-bats in 2004, Neifi hit .371/.400/.548 with two homers and five doubles. (It was pointed out yesterday in one of the threads that this is a good small-sample-size comparison for what Micah Hoffpauir hit in his first 73 major league AB: .342/.400/.534). Neifi had never come close to numbers like that with the Rockies, Royals and Giants, but Cubs fans could have been forgiven if they thought they had at least a decent backup infielder.

Neifi was thrust into a starting role in 2005 when Nomar got hurt again, this time a horrible groin injury that made almost every male Cubs fan cringe, on April 20, 2005. He played well enough for two months (on June 5 he was hitting .325/.348/.485) that some blogs (this one and The Cub Reporter) were pushing a write-in campaign for Neifi for the All-Star team. (We were kidding. Sort of.) We weren't the only ones -- check out this MLB.com article by Carrie Muskat in which both Nomar and Derrek Lee were pushing for Neifi to be an All-Star:

"He deserves it," Lee said. "Look at his numbers. I don't think there's a shortstop with better offensive numbers."

"There should be a Cubs shortstop there, and it's the guy who's playing there right now," Garciaparra said of Perez. "He's been unbelievable. He definitely deserves it."

That, of course, was Neifi's cue to stop hitting. From June 6 to the All-Star break he hit .167/.191/.190 (no, that's not a misprint, that's a .190 SLG), and wound up the year hitting .274/.298/.383, just about exactly his career averages. Nevertheless, Dusty kept trotting him out there, mystifyingly batting him leadoff or second on many occasions, and responding to criticism with quotes like this:

"I hear a lot of people say, 'Put Cedeno in.' What am I supposed to do? Push Neifi out now? This guy has saved us."

Saved the Cubs from what, exactly, is the question Dusty never answered; they finished fourth at 79-83. But Dusty's "horse" was right back in there in 2006, starting many games at 2B or SS and producing things like the mystifying bunt he laid down with two out and two on and the Cubs down by two runs in the bottom of the ninth against the Nationals on May 18, 2006. It turned into an easy comebacker and the Cubs lost.

Jim Hendry was the one who finally "saved" the Cubs by shipping Neifi to the Tigers. Neifi should thank him, because he wound up playing in the World Series, while the Cubs lost 96 games. The next year, he was suspended twice for PED use, the second time for 80 games; that ended his major league career.

But as checkered as Neifi's Cub and post-Cub career was, we should always hold a little place in our hearts for him, because on September 27, 1998, while a member of the Rockies, he hit a walkoff homer in Coors Field against the Giants, forcing the wild-card tie and the September 28, 1998 tiebreaker game, which the Cubs won.