Mostly cloudy with a 70-percent chance of rain. Winds blowing in from center field at 20-30 m.p.h. Game Time temperature: Around 65.

Without trying to make any political comment, I note that the Rev. James Meeks is intending to "ring Wrigley Field" with up to 6,000 orange-clad protesters, who are trying to make a point about school funding. Mayor Daley is asking Meeks not to do it and in this case I have to agree with him -- to have 6,000 extra people in the neighborhood that day (or night), with all the traffic and security issues that a sellout crowd produces, is asking for trouble.

Rev. Meeks has a legitimate issue that needs to be addressed, one way or the other. Protesting at a Cubs playoff game isn't the way to do it.

Here's the current weather forecast for New York City:This Afternoon: Cloudy, with a high near 67. East wind around 18 mph.

Tonight: Rain, with thunderstorms also possible after 2am. Some of the storms could produce heavy rainfall. Low around 60. Breezy, with a east wind between 21 and 24 mph. Chance of precipitation is 100%. New rainfall amounts between a half and three quarters of an inch possible.

Given the fact that this rain may go through the weekend and threaten one or more of the Mets/Marlins games, they'll do everything they can to get this one in. I assume Lou will pull the regulars off the field if it's raining too hard and play the callups.

Today, not one but THREE Gratuitous Geo Photos (and he may actually play by tomorrow): 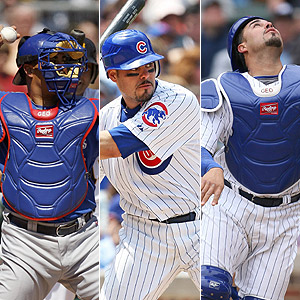 Here's what the weird schedule, plus injuries, do: Pedro Martinez has been with the Mets for four years, but he has not faced the Cubs at all in that time. He last faced the Cubs on June 8, 1997. That's completely irrelevant to today's game, as Pedro is one of only three players in that game who are still active (the others: Mark Grudzielanek and Jose Vidro). Just thought you'd be interested in a little bit of Cubs history. Pedro faced Alfonso Soriano quite a bit when he was with the Red Sox and Soriano was a Yankee. If there's a day to give Soriano the day off, today is it: he's 7-for-43 vs. Pedro with no walks and 15 strikeouts.

Rich Harden, in his final regular season start this year, has never faced the Mets. The only current Met to have more than six career AB vs. Rich is Carlos Delgado, who is 1-for-7, that hit being a HR. Harden has thrown 142 innings combined this season, so he wouldn't have qualified for any ERA titles even if he had been in one league the whole year, but coming in with a 2.03 ERA combined, he has a chance to have a sub-2.00 ERA in more than 140 innings, quite impressive.

Today's game is on CSN Plus -- that's a change from the original schedule, the White Sox game was moved to CSN's main channel. For more see the MLB.com Mediacenter.