Share All sharing options for: The "Who Will Bulldog Lilly Run Over Today?" Thread: Cubs vs. Brewers, Saturday 9/27, 2:55 CT

It's still warm here in the Midwest, so it's likely the roof at Miller Park will be open again today -- which, with the late-afternoon start, should create weird shadows on the field. There's nothing left for the Cubs this regular season except: try to win two games to equal the club's highest win total since 1935, and to try to knock the Brewers out of the postseason.

Today's Geo Photo is not gratuitous -- here he is being examined by Lou and a trainer after he aggravated his hand problem. Geo said he was fine after the game and probably would have had today off anyway. 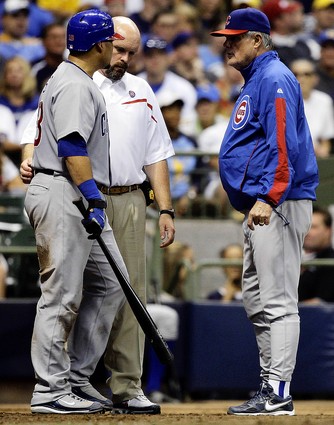 The Brewers, desperate, turn to Ben Sheets, who left the game at Wrigley Field on September 17 after two innings with elbow trouble. He's 1-1, 4.82 vs. the Cubs this year; the last time the Cubs faced him in Miller Park on July 29, they hit him pretty hard. Derrek Lee is 17-for-53 (.321) with 6 homers lifetime vs. Sheets. I would expect all the starters to go today except Geovany Soto, nursing that hurt left hand, and Mark DeRosa, who's going to rest his strained calf until tomorrow.

The last time Ted Lilly pitched in Miller Park, he threw seven one-hit innings with nine strikeouts. Of course, that was against the Astros, not the Brewers. Still, Lilly has completely turned around his poor start -- he's 6-3, 3.50 in August and September, and after allowing an alarming total of 31 homers in his first 30 starts, he's given up only one in his last three. He's 0-1 vs. the Brewers this year, but that loss was in April, a long time ago. Prince Fielder is 5-for-12 off Lilly, but without a homer.

Today's game is on Fox. Here is the Fox link that shows who's carrying which game in your market. For other games today see theMLB.com Mediacenter.