The weather forecast above notwithstanding, I would guess with the cooler weather, the roof at Miller Park will be closed today, as it was yesterday.When the schedule came out for this season, I know a lot of us thought today's game might be important for both teams. Instead, the Cubs are using it as a tuneup -- Carlos Zambrano was going to start, but he decided he'd rather throw on the side:Cubs manager Lou Piniella said Zambrano told team officials he'd rather throw a side session in the bullpen instead of working the first couple of innings Sunday. If Zambrano had started, he would have been pitching on three days' rest.

"He would rather long toss," Piniella said. "That's his preference. He feels that's a better scenario for him, and what we're interested in is what's best for him."

That's fine with me too. Angel Guzmán hasn't started since 2006 -- and still has no major league wins -- but this is a fine opportunity to show Lou what he has, to look forward to next year as the Brewers desperately try to win the wild card.

Today's Gratuitous Geo Photo is courtesy of BCB reader Brad Zurcher, who took it in Cincinnati on September 16: 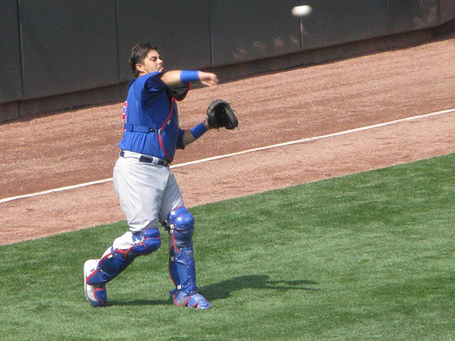 The above stats are Sabathia's with Milwaukee only -- see the pitcher box above for his full season stats.

The ESPN article linked above says that no Cubs pitcher will likely go more than two innings today -- so Guzmán, who has yet to win a major league game, won't get a chance to win this one, either. It's anyone's guess who will follow him, though I'd expect to see Bob Howry and Jeff Samardzija, who didn't pitch yesterday, as well as possibly Sean Marshall.

Today's game is on WGN and FSN Wisconsin. Also see the MLB.com Mediacenter.