The Case For The 4.5 Man Rotation

Share All sharing options for: The Case For The 4.5 Man Rotation

Bill James once wrote that the five-man rotation didn't make sense because, essentially, you were taking about eight starts from each of your four best pitchers and giving them to your fifth-best starting pitcher.

It's not quite that simple, of course, because modern starters don't go as long as pitchers did as recently as the 1970's. Whether they should do so or not is an argument for another post. 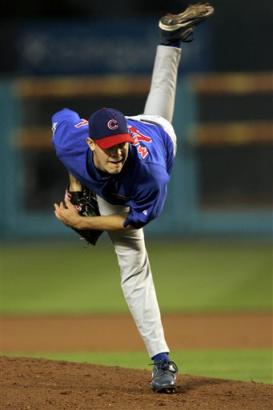 One thing managers do, in general, in this era of the five-man rotation, is to keep sending the five guys out there, in order (barring injuries, trades, etc.), regardless of days off. I got to thinking, why not use the off days, especially early in the season, to keep your top four guys going every fifth day, and slotting the fifth guy in there only when needed?

The 2009 Cubs schedule happens to lend itself quite well to such a plan. I slotted in Ryan Dempster, Carlos Zambrano, Ted Lilly and Rich Harden, in that order (change up the order if you think yours works better), making sure they had at least four days' rest, and the put Sean Marshall in when needed. When there were off days that allowed the first four to continue on and still have the minimum four days' rest, I left Marshall out.

The result is 35 starts for the first four starters -- that's one more than they'd have in most current rotations -- and 22 starts for Sean Marshall, which is about the workload you'd want to have for him. The rest of the time he could be in the bullpen, throwing an inning here or there to keep sharp, or be available if one of the other starters gets blown out early.

The Cubs had some success using Terry Mulholland in this sort of role in 1998, although Mulholland made only six starts and was mostly a reliever. He went at least two innings in relief 13 different times. Marshall could play this role. Or you could substitute "Chad Gaudin" for Marshall. This way, the Cubs get optimum production out of their best four starters, have an extra long reliever in the bullpen for a fair chunk of the season, and save money which could be used for a midseason acquisition.

Here's the rotation I came up with. The link opens a Word document in a new browser window, which you can save to your computer and edit if you want to play around with this. Food for thought on a snowy Tuesday in Chicago.