The Cub Can Of Worms: Don Baylor

Share All sharing options for: The Cub Can Of Worms: Don Baylor

Don Baylor was the first manager of the Colorado Rockies, and in his six seasons there he led the Rox to a winning record three times, including a playoff spot (the first NL Wild Card) in their third season, at that time a record for the fastest run to the postseason for an expansion team (the Diamondbacks broke it in 1999 in their second year).

So when Jim Riggleman was fired after the Cubs tanked the second two-thirds of the 1999 season (after a 32-23 start, they went 35-72 the rest of the year to lose 95 games and it was pretty clear the players quit on Riggleman the last couple of months), then GM Andy MacPhail figured Baylor, a winner in Colorado, could light a fire under the Cubs. 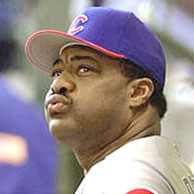 He was wrong, at least in his first year. Baylor and his old third base coaching buddy from Colorado, Gene Glynn (Glynn, at least, was mostly a nonentity, unlike Dusty Baker's 3B coaching pal Wavin' Wendell Kim), presided over a 2000 season that was even worse than 1999; the Cubs lost 97 games, went 16-42 from August 1 to season's end (losing 20+ games in both August and September and from Aug. 31 to Sept. 20 going 2-17), and by the end of 2000 Daniel Garibay, Jamie Arnold, Jerry Spradlin, Joey Nation, Phil Norton and Andrew Lorraine had all started games for the Cubs. (Wow. It hurts just typing those names.)

So it wasn't all Baylor's fault -- he didn't have the "horses", as a future Cub manager would say. Aside from Mark Grace and Sammy Sosa, the next leading RBI man on the 2000 Cubs was Ricky Gutierrez, with 56. Third base was an ugly platoon of Willie Greene, Shane Andrews, Jeff Huson, Jose Nieves and Chad Meyers.

So 2001 wasn't expected to be better -- only it was. Just as Baylor can't be blamed for 2000, he doesn't really get credit for 2001. Sosa had what is probably the best offensive season in club history, Rondell White had a fine first half before getting hurt, and guys like Ron Coomer and Matt Stairs contributed to the Cubs' surprising run that lasted into September before they faded. The 88-win season, with Jon Lieber winning 20 games, gave the Cubs hope for 2002.

Baylor must have thought his sacrificing was what was causing the team to win. It didn't really help them score runs -- the 777 runs they scored in 2001 ranked 13th in the majors. He kept doing it in early 2002, even though the Cubs got off to an 8-17 start, and later lost nine in a row, dropping them to 13-27, Baylor kept bunting. The one I really remember was on June 27, 2002, against the Reds at Wrigley Field, with the Cubs mired in fifth place, 9.5 games out and 11 games under .500.

Corey Patterson -- now there's a name you might have thought you'd never hear again here! -- led off the bottom of the first inning (after the Reds had failed to score in the top of the inning) with a double.

With a runner on second and nobody out in the first inning of a scoreless tie. (He succeeded, but Patterson failed to score and the Cubs lost 5-4 in 10 innings, after Antonio Alfonseca blew a 3-1 lead with two out in the ninth.)

It was almost as if Baylor was daring MacPhail to fire him. A week later, MacPhail obliged him. MacPhail also fired himself that day; that's when Jim Hendry took over as GM; his six and a half years on the job make Hendry one of the longest-tenured GMs in the majors today. Bruce Kimm took over and "led" the Cubs to a 33-45 mark, finishing off another 95-defeat season. The bunting stopped, though -- the 2002 Cubs had only 78 sacrifices, ranking fifth in the majors.

Baylor failed to get another managing job, continuing a line that had begun with Whitey Lockman. Dusty Baker became the first ex-Cub manager to get more than an interim job since Jim Marshall when the Reds hired him. He was hired in November to return to the Rockies as hitting coach. Watch out for bunts. In three of Baylor's six years as manager, the Rox ranked either first or second in the majors in sacrifices.