Coffee Is For Closers

Share All sharing options for: Coffee Is For Closers

In this morning's Tribune, Fred Mitchell reports that Lou Piniella hasn't settled on a closer yet: 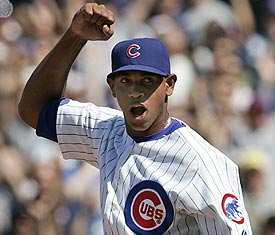 "Let them compete," Piniella said during the Cubs Convention. "I feel comfortable with Marmol, no question. But we traded for this other young man, and he was a closer over (with the Florida Marlins) with success. Give him a chance too."

To which I say, excellent! Carlos Marmol has the best stuff in the Cubs' bullpen. Many teams have taken that "best stuff" guy and made him their closer. But often, closers come into games in low-leverage situations: ninth inning, three-run lead, bases empty. Most major league pitchers can get three outs and pile up saves in those situations. Often, the tougher situations come in the 7th or 8th innings, with games tied or only a one-run lead and runners in scoring position. Last year, Kevin Gregg, while closing for the Marlins, walked 37 batters in 68.2 innings. Marmol walked 41 in 87.1 innings, and 14 of those 41 walks came in that inexplicably bad 15-game stretch between June 19 and July 24 when he allowed 11 earned runs in 12.2 innings and his season ERA jumped from 2.09 to 3.40. After that he settled down and from July 26 to the end of the season, a span covering 30 appearances and 31.2 innings, he walked only 12, struck out 39 and posted a 1.42 ERA. 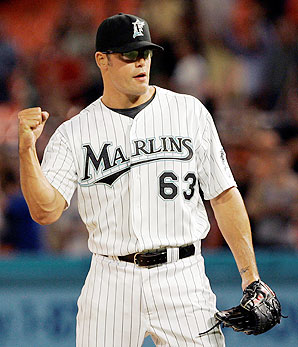 Meanwhile, Gregg had eight saves (out of his season total of 29) where he issued at least one walk. Before several September games in which he was used in situations where the Marlins were either behind or well ahead, he was used in the 8th inning only three times all year (the only times he posted a save of longer than one inning, and once where the Marlins were well behind and it appears Fredi Gonzalez just wanted to give him some work). He did get better about the walks in the second half of the year (27 before the All-Star break, 10 after, but then, he made 46 of his 72 appearances before the break). I'm just not convinced that putting Gregg in setup situations where he might come into a tie game with the bases loaded in the 8th inning -- where a walk puts you behind -- is the best use for a guy like him without pinpoint control.

There's no doubt in my mind that Marmol can handle the closer role -- he did so effectively while Kerry Wood was on the DL in midseason 2008, and he has the stuff and the right mindset for it. But would holding out Marmol for the ninth inning only mean that Gregg, setting him up, would have blown the lead and there wouldn't be anything for Marmol to save?

Kevin Gregg is probably a one-year Cub; he'll be a free agent after 2009, and that gives Cub relievers like Jeff Samardzija and Angel Guzman one more season to be eased into a setup role for Marmol, who could take over as closer in 2010. For now, I think the best use of Lou Piniella's bullpen would be for Gregg to close, after Marmol has put out the fires in the 7th or 8th inning.