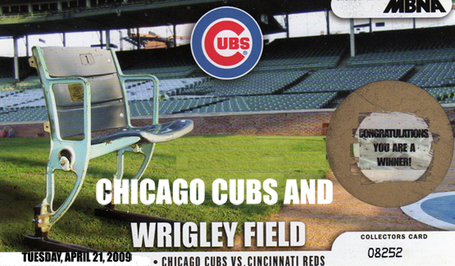 Stymied by the state of the economy and seemingly eternal delays in the nearly two-year-old saga that is the sale of the Chicago Cubs, Tribune Co. owner Sam Zell today directed team management to turn ownership of the ballclub and 95-year-old Wrigley Field over to 12 lucky fans.

Cubs Chairman Crane Kenney announced the promotion, saying, "There will be six games during the 2009 season, one every month (except October, where there are only four games), in which the first 20,000 fans to arrive at Wrigley Field will get a scratch-off card. Two cards at each game will have the "Congratulations, you are a winner!" underneath the scratch-off circle. Those fans will be designated Owner of the Cubs for a month, beginning with May. Having two winners each month will assure us of having an owner year-round; we'll do more scratchoffs during the 2010 season and in the years to follow."

Kenney said that each winning owner would have all the rights that Zell now has -- to be able to hire and fire, sit in a box seat or suite of his or her choice, and would be able to go to owners' meetings in swanky resort towns. The winner would have to provide the means to keep running the team during his or her reign; Kenney stated that the ticket price increases would assist the winning owners in meeting payroll, as well as advertising revenue from WGN radio and TV and the team's 25% stake in Comcast Sports Net, as well as any ticket resale schemes and marketing of anything they can slap an ad on at Wrigley Field.

When asked if this wasn't going to be a little bit like the failed College of Coaches that the Cubs tried in the early 1960's, Kenney bristled. "You don't see the word 'college' in there, do you?" he said. "There's no educational requirement to win this ownership contest."

Players were philosophical, although center fielder Reed Johnson worried that different owners might have different policies on facial hair. Derrek Lee wondered, "Will each new owner be bound by no-trade clauses?" And, Ryan Theriot expressed concern that certain owners might not like certain players and, during their month, would downplay the sale of souvenir jerseys bearing certain names and numbers.

Fans were excited. Patricia Grabowski of downstate Hoopeston said she'd make sure to attend every game where these scratchoffs were a giveaway: "Maybe I can meet Mike Fontenot!", she said. Fans who win the right to be team owner during the baseball off-season will also have the rights to schedule non-baseball events at Wrigley Field; Ryan Balin of Ankeny, Iowa, suggested horse racing, saying, "Didn't Dusty Baker always say he had to have his horses? Now we can!"

Apart from the April 21 game against the Reds (pictured in the sample scratchoff above), the dates for the rest of the giveaways have not yet been announced. The Carlos Zambrano No-Hitter statue giveaway already scheduled for April 21 will go on as planned that date; in addition to the two winners of a month's team ownership, 100 random winners will get to meet former Cubs manager Baker, now in charge of the Reds, after the game and have an item signed by Baker (100 additional winners will get second prize, two autographed Baker baseballs).

In the event of any disputes arising as the result of this promotion, left-handed fans will be given preference.