The Speculation On The Tom Ricketts Era Begins

Share All sharing options for: The Speculation On The Tom Ricketts Era Begins 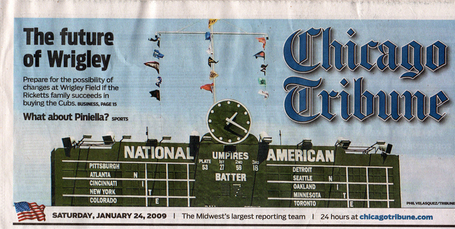 That's the top of today's dead-tree edition of the Chicago Tribune.

Inside are two articles, one by two business section reporters, covering what changes might be made to the ballpark and other possibilities for new revenue, and one by Paul Sullivan discussing the possible changes that might occur to the team itself.

Sullivan mentions something that I've long speculated about:

Mark McGuire, the Cubs' executive vice president of business operations and a team employee since Tribune Co. bought the team in 1981, believes the new owner might bring in more people rather than get rid of those already in place. McGuire told fans at the Cubs Convention last week that the team has one of the smallest front offices in baseball.

I think that's one of the first things you'll see -- beefing up the existing full-time, year-round staff, including both the non-baseball and baseball operations departments. The scouting staff needs help, and I think you would all be surprised at how small the ticket department is, considering how many tickets the Cubs sell.

A lot of the rest of Sullivan's article consists of things we've discussed here, ranging from some guy who pitches for the San Diego Padres to the idea that the team may pitch for more night games (or, at the very least, having the right to play some Friday night games after road trips, which makes sense to me).

The article in the business section discusses ways that the Cubs could generate additional revenue. Many of these things have also been discussed on this site, including the "Triangle Building" that may finally get built:

There also is renewed interest in Tribune Co.'s shelved idea to construct a triangular-shaped building that would include stores and restaurants along Clark Street and create a pedestrian walkway outside Wrigley, similar to Yawkey Way outside Fenway Park, home of the Red Sox.

On game days, Yawkey Way is closed to traffic, and ticket-holders enter it, and the ballpark, through turnstiles. The setup, and wide mix of vendors, is similar to Eutaw Street outside Baltimore's Camden Yards, where the Orioles play, and enables the teams to profit from pregame spending.

Before Yawkey Way, fans were spending pregame dollars in the neighborhood of Fenway, but they weren't coming in.

"People didn't pass through the turnstile until right before the game," said Janet Marie Smith, senior vice president of planning and development for the Red Sox and architect behind the renovation of Fenway and development of Oriole Park at Camden Yards. "In order to stay competitive, we've got to make money."

Similar efforts at Wrigley, which has protected status as an official city landmark and must retain its traditional look, might aid the ballpark but could come at the expense of neighborhood street vendors, restaurants and bars.

"There are a lot of people who make money on the Cubs that are not paying the players," Ganis said. "There is no other team in baseball that has the number of businesses piggybacking on the team that the Cubs do. Increase the pie, but the Cubs have to get a bigger slice."

I wouldn't expect any existing streets to be closed; the pedestrian area they're talking about would probably be created in the area which is now parking for Cubs players and office staff (those people would then park in the triangle building itself).

Some of the other ideas discussed in that article include a Cubs TV network, which I would expect to happen as soon as the economy improves and they can get it carried on cable and satellite nationwide; adding a larger stadium club, and extending the upper deck. And for those of you gnashing your teeth over the possibility of the Cubs selling naming rights to Wrigley Field:

Other revenue-generating opportunities have potential but also may have to wait. The notion of selling some version of naming rights at Wrigley is off the table, sources said.

Finally, an old friend of Tom Ricketts, who used to live with him in that apartment across from the ballpark, says we've got the right guy:

Curt Conklin once lived with Tom Ricketts in an apartment just outside Wrigley Field, and the two were regulars at Cubs games. He knows Ricketts wasn't just a fan, but could recite Rick Sutcliffe's 1984 statistics (20-6, 3.64 ERA).

"The success of his life is that he has done this (built his company) 100 percent on his own," said Conklin, a day after it was announced Tribune Co. selected the family's bid for exclusive negotiations. Without being a meddler, Ricketts' drive and decision-making ability would be good for the team, he said.

Sounds perfect to me. We are about to embark on a new Cubs era, where "one of us" is in charge.