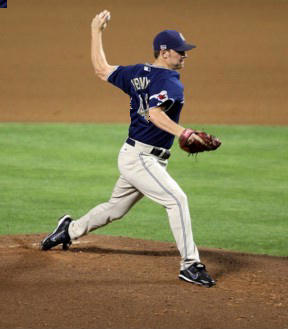 In an effort to make himself more attractive to his potential future manager, Lou Piniella, San Diego Padres pitcher Jake Peavy announced this morning that he will undergo surgery that will allow him to pitch and hit lefthanded. It's not expected to be a complicated procedure and Dr. Howard "Lefty" Goldberg said that Peavy will be ready for spring training, which begins in only a couple of weeks.

"I've always been a team player," said Peavy, "and with the Cubs and Cubs fans seemingly ready to pick me up at O'Hare Airport with a Cubs uniform waiting, I thought I'd do something that I know would please my soon-to-be new manager."

Peavy, a .186 career hitter with two homers and 14 doubles in 382 career at-bats, will begin taking batting practice lefthanded as well. "I thought that if Lou wanted me to lead off, I could do better for the team if I hit lefthanded," Peavy said. "I'm going to get some lefthanded hitting tips from Jason Marquis."

Current leadoff man Alfonso Soriano, quoted in the Tribune today as saying he'd bat anywhere, in a statement made at the Cubs Convention:

"I feel comfortable batting leadoff and any [place] in the lineup," he said recently at the Cubs Convention. "It's not about me, it's about the team and what [manager Lou Piniella] wants to do this year because, I'm 33 now and they think I can't run anymore."

... added in a statement made to BCB that he'd be willing to bat ninth, if that's what it would take to get the new lefthanded Peavy in the lineup every day, pitching and leading off.

Padres general manager Kevin Towers scheduled five news conferences and appearances on local and national talk radio today to discuss the surgery, various proposed Cubs lineups with Peavy pitching and batting, and any other topics he could get reporters to talk about with him. "Don't you want my opinion on Rod Blagojevich?" Towers said. "I think he's lefthanded, too."

No one seems to know the answer to that question, Kevin. But don't let that stop you.