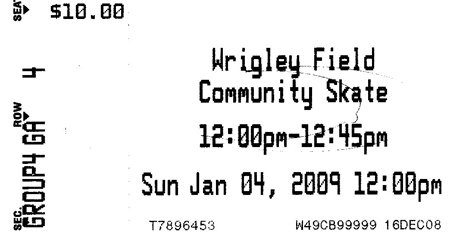 The community skate on the ice rink at Wrigley Field was perhaps the coolest thing I've ever done, and that's not overhyping it, either.

The Cubs gave a tremendous opportunity to several hundred of us who live within a couple of miles of the ballpark, to be able to skate on the Winter Classic ice rink this morning and afternoon. About 100-125 people at a time, ranging from middle-aged adults like me to kids as young as three or four, took to the ice. It was a happy, festive atmosphere as people reveled in the chance to be on the floor of Wrigley Field, even with the whole thing covered with man-made snow, boards, ice and other coverings. Note: the ground crew will have work to do once spring comes. Thank heavens the grass is dormant this time of year. I think the field will be just fine, considering it was new only a year ago, and with the new drainage system, the crew should be able to get it in shape by Opening Day. Before we got on the ice we had to sign a release form that was printed in such small type it would have taken the entire session time just to read it. As far as I could tell, no one got hurt at all. There were a few people wearing red "Winter Classic" jackets skating around (at times, pretty fast), keeping an eye on everyone to make sure things went smoothly.

Several TV crews showed up to document the event; the group I was in (that started at noon) got some bonus time; the other sessions lasted 45 minutes, with a few minutes to clear the ice and to Zamboni it for the next group, but ours got a full hour, since the next session wasn't scheduled till 1:40.

I actually had been on skates a year or so ago when my company's holiday party took everyone to Millennium Park for family skating. My teenage kids enjoyed the chance to get out there and -- no lie -- I didn't fall even once. And if you think I'm actually going to post a photo of me on the ice so you can make fun of me... sorry, not happening. I do have a new appreciation for the athleticism of pro hockey players, who not only can skate fast and accurately, but have to focus on their task with their sticks, all the while getting pounded -- hard -- by opposing players. The boards of the rink, having hosted only one game, showed the black marks from skates and sticks and had a few gouges in them.

As I said, no photos of me, but below the fold (click on "Continue reading this post") there are several pictures of this once-in-a-lifetime event. Many thanks to the NHL and the Cubs for providing the chance. 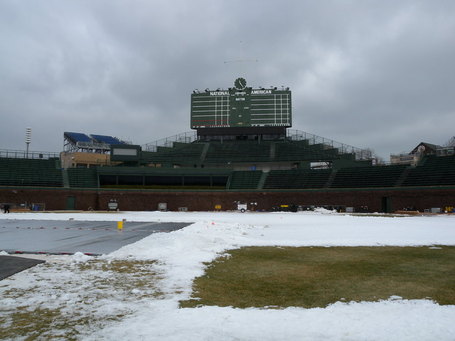 The bare grass is where the Blackhawks logo was during the Winter Classic. 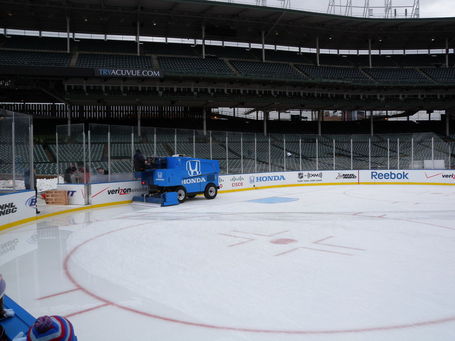 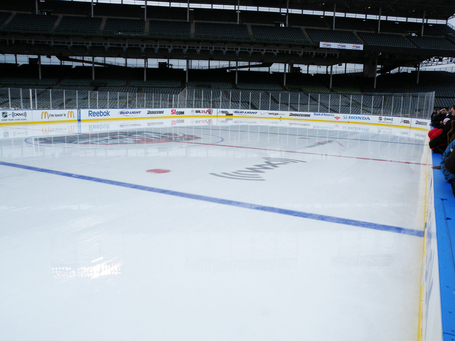 The Zamboni clears off the ice between sessions. 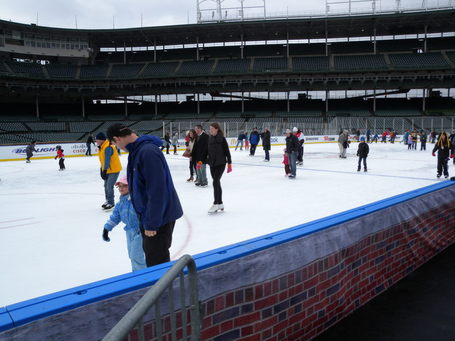 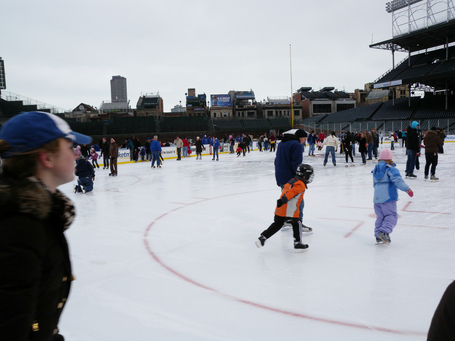 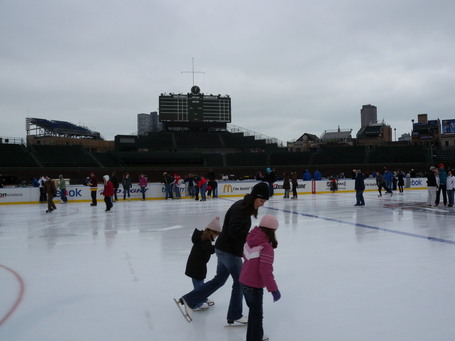 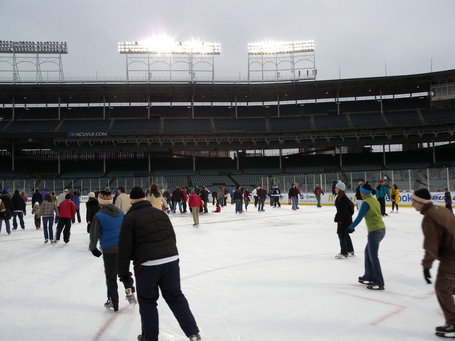 Skaters enjoy the ice at Wrigley Field on Sunday, January 4. Above are four different angles of the rink. 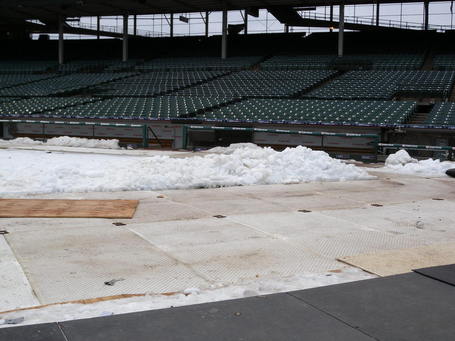 In 99 days, Lou Piniella and Co. will be ready for baseball action in this dugout!

Click on photos to open larger versions in new browser windows. All photos by Al