Though it's not official yet, the Cubs have apparently signed outfielder Milton Bradley to a three-year, $30 million contract:

The deal, expected to be in the three-year, $30 million range, will be finalized after the two sides work through language issues and Bradley passes a physical, sources said.

We also don't yet know how that $30m is going to be split up, whether it might be another of Jim Hendry's patented backloaded contracts. For that, we'll have to wait and see.

Since I've been anti-Bradley since the rumors of his possible signing began, I thought it'd be worth a front-page post to discuss what he can -- and shouldn't -- bring to the Cubs. It's clear that the Cubs have never had a player quite like this before. When healthy, his combination of power and speed and plate discipline has been matched by few major league hitters. He led the AL last year in OBA and had a .999 OPS, higher than any 2008 Cub. 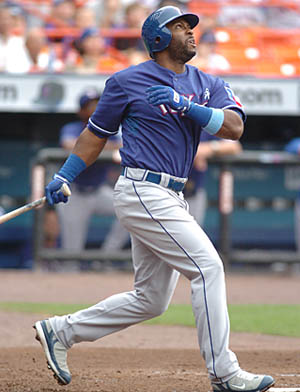 Unfortunately, about 2/3 of his 2008 games were played at DH, the results of a healing knee injury that was suffered during an altercation with umpire Mike Winters on September 23, 2007. Bradley went crazy and had to be tackled by his own manager, resulting in the knee injury. To be fair to Bradley, he was apparently baited by umpire Mike Winters, and according to this, that wasn't the first time Winters had pulled a stunt like that.

You can call that passion, or you can call it stupidity. In reality, it's a little of both. It winds up being stupid when it costs your team games while you can't play. Bradley hit .313/.414/.590 in his 42 games with the Padres -- don't you think they could have used him that final week of 2007? It can be reasonably argued that Bradley's tirade may have cost the Padres a playoff spot, which they lost by one game in a tiebreaker. Maybe Bradley would have helped them win one more game that last week, had he been available, and they wouldn't have had to go to the tiebreaker. You can say all you want that "half a season of Bradley is 'better' than a full season of Abreu or Dunn", and statistically speaking, you'd be right. But Bradley can't win games for his team when he's hurt, and he has played 140 or more games in a season once in his career -- in 2004 with the Dodgers. Perhaps NOT coincidentally, that was LA's only postseason appearance between 1995 and 2008.

Teammates and managers of Bradley's have said that he wants to win so badly that he sometimes goes off the deep end, which is true -- we have seen evidence of it in several different uniforms, and the story is that he had such a bad relationship with Eric Wedge, his manager in Cleveland, that they almost had to trade him.

Passion and desire to win are great. That's something that every professional athlete should have. That said, they have to channel it in ways that go into winning on the field, not running after umpires -- even when you're right -- and not chasing after the opposing team's broadcaster when you think you've heard something you don't like (haven't we had enough of our players calling up our OWN broadcasters when they didn't like what they heard?).

You know that this is the first thing the Chicago media is going to ask him about at the press conference announcing his signing. The way he reacts to the questions will tell us a lot about how he will approach his time in Chicago. He has played in "big markets" before -- but LA's pretty laid-back, Oakland isn't really a big baseball town, and Texas doesn't have the passion for its team the way Cubs fans do.

I'd rather have had Adam Dunn or Bobby Abreu. But I'll say this: Jim Hendry has done a fine job since the end of 2006, putting together good teams that are cohesive and win, and Lou Piniella, in spite of pitcher and lineup handling that sometimes makes our heads spin, is a good leader of men. I hope he will be someone who can help channel Milton Bradley's considerable passions into winning baseball. If Lou can do that for Milton -- and if Milton can stay healthy for a full season -- then I'll be happy to say I was wrong, and I think I'll also be celebrating another Cubs division title.

Welcome to Chicago, Gameboard. You're in for a hell of a ride.