Share All sharing options for: Pirates Sweep Split-Squad Games From Cubs, 4-0 And 8-2

The lineup for game one yesterday read like the list of players the Cubs send to Tucson every spring to play the Rockies. You know, because the regulars don't want to ride the bus for two hours.

They played like they had ridden that bus, too, getting shut out 4-0 by the Pirates and Charlie Morton, a guy they had scored ten runs off of on August 14 before he could even register more than three outs. On a sunny but chilly afternoon when the announced attendance was 34,362, no more than about 13,000 entered Wrigley Field. For the first time that any of us could remember, the Cubs actually closed off the center-field bleachers with yellow caution tape, reminiscent of the days in the 1960's and 1970's when the Cubs wouldn't open the upper deck on weekdays when they expected small crowds. This practice ended after 1981 when the Cubs stopped selling general admission tickets in the main part of the ballpark. (See below the fold for a photo.) The announced attendance, based on the number of tickets sold, put Cubs attendance past 3 million (3,056,781 with four dates remaining) for the sixth straight year. The Cubs will need to put together a good offseason to do that again in 2010.

Ted Lilly didn't throw badly in the first game -- that is, after the first inning, when all four Pirates runs crossed the plate. Some questionable defense didn't help -- Bobby Scales, who again I remind Lou is not an outfielder, pulled up short on Lastings Milledge's looping line drive, allowing it to bounce in front of him. Then he nearly got Garrett Jones having taken too long a turn past second base; if this play had worked, Steve Pearce's ground ball on the next at-bat would have ended the inning with only one run scoring. Instead, Jason Jaramillo followed with a double to the LF corner, on which Jake Fox made a Jacque Jones-like throw to the infield, allowing Jaramillo to take third. Didn't really matter, as .225-hitting Brian Bixler drove him in.

And that was it -- the Triple-A lineup the Cubs sent up in game one managed only four singles, three walks and a hit batsman off Morton and got only three runners past first base; the last of those, Scales, took second on defensive indifference with two out in the ninth.

The weather for the night game (announced attendance 33,299; actual count in the park about 17,000) was colder than Tuesday night's and so were the Cubs' bats. The presence of Derrek Lee, who had two hits and a walk, made it a little less split-squaddy, but D-Lee appeared to still be bothered by his left foot, the one he fouled a ball off of on Tuesday night. It appeared that Lee's first-inning single might have gone far enough for him to reach second base, but he pulled up fairly slowly going into first, not wanting to risk any further injury on a chilly evening. We are told that Aramis Ramirez is going to play "sparingly" the rest of the year, which I'd read as "he won't play at all unless the weather warms up", which it probably won't. A-Ram gutted out half a season -- 80 games -- worth of very good performance considering the serious injury he suffered, and now he needs to rest up and be 100% for 2010. It appears he won't need surgery, which is good news.

Carlos Zambrano made it through six innings in his final 2009 start and didn't pitch too badly, but didn't have his best command. He walked four and two of them scored in a third inning where he couldn't manage to get that third out. One run had already scored when Z struck out Milledge, but Brandon Moss followed with a two-run single, and that, as the saying goes, was that. The Cubs managed their second and final run of the night in the bottom of that inning when Z smacked a double to deep center field, advanced on a groundout by Sam Fuld and scored on a nicely executed sacrifice by Ryan Theriot, perhaps the best thing the Cubs did all day. Z also hit another deep fly ball to CF in the fourth that was caught by Andrew McCutchen. No other Cub hit anything as well as Z did in his two at-bats.

Last night I met BCB reader katie casey and her husband and son -- nice to meet you; wish you (and the rest of us) had been able to see even one win yesterday. The Cubs now need to win all four remaining games on this final 2009 homestand to have a winning decade (this particular decade defined as "the ten years comprising 2000-2009"). That's a worthy goal, and also an 86-76 record would be one game better than Lou's first season as manager in 2007.

Weather permitting -- and this forecast doesn't look too encouraging -- the Cubs and Pirates will finish off their season series tonight. The Cubs clinched second place in the NL Central last night when the Brewers lost to the Rockies; that's nice, but not the goal we were all seeking this season. 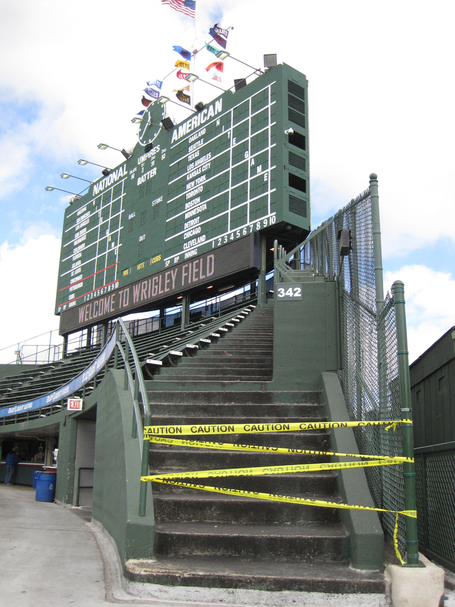 The CF bleachers were closed for game 1 on Wednesday. BCB photo by David Sameshima (click on photo to open a larger version in a new browser window