Where the Wild Things Are - A Story in Pictures

Share All sharing options for: Where the Wild Things Are - A Story in Pictures

The Chicago Cubs are relying on Carlos Marmol to be their closer in 2010. Is this a good idea? 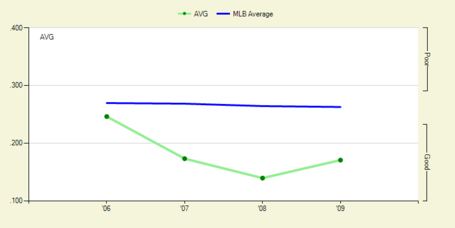 Marmol was tough to hit primarily due his ability to get strike outs at an incredibly high rate. 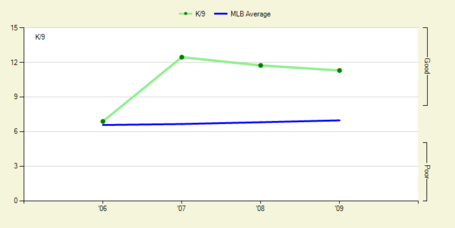 In addition to striking out batters, Marmol also doesn't give up many home runs. 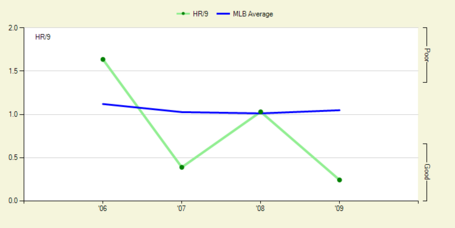 So he's a great pitcher, right? He doesn't give up many hits or home runs, and he strikes out lots of opposing batters. I think everyone reading this blog knows Marmol's main issue. Control. Follow me past the jump to find out more... 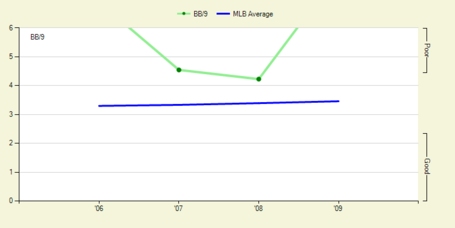 Yikes. That line is literally off the charts.

Marmol has been bad the last few years when it comes to getting his pitches into the strike zone. (Note the rest of the graphs are not from fangraphs. They're my own creations. I replicated their style so things would match up nicely.) 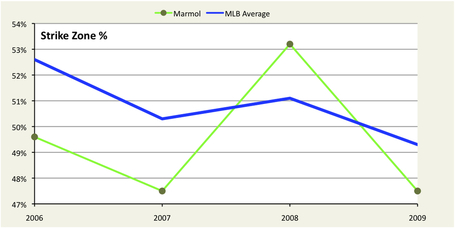 Unfortuantely, it gets worse. Marmol was pretty good at finding the strike zone in 2008. But he had a low (for him) walk rate rate in 2007, a year in which he was just as bad at finding the strike zone as he was in 2009. So what caused the discrepancy between 2007 and 2009? Well, take a look at the rate at which Marmol got opposing hitters to swing at pitches out of the zone: 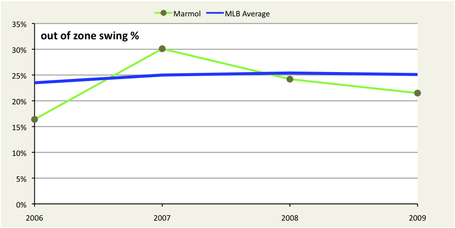 So now we see that over the last 3 seasons, there were 3 different versions of Carlos Marmol. In 2007, Marmol missed the zone a lot. However, he was able to compensate for that by getting hitters to swing at his pitches out of the zone. In 2008, fewer batters chased his bad pitches, but he managed an above-average ability to find the strike zone. Then in 2009, he missed the plate and hitters weren't swinging at his pitches out of the zone.

What can we expect out of him in 2010? I consider his control in 2008 to be an aberration. As such, in my opinion this question boils down to whether Marmol exerts some... cough... control over whether or not batters are swinging at his pitches out of the zone. I took a quick look at the break on his pitches over at fangraphs, and didn't see any trends that jumped out at me. So I grabbed the pitch FX database and ran a query on the locations of all his pitches from each of 2007, 2008, and 2009. First, I'll show you the location of his pitches in the vertical direction. The following chart shows the number of pitches at each height, with the strike zone shown as dashed lines. 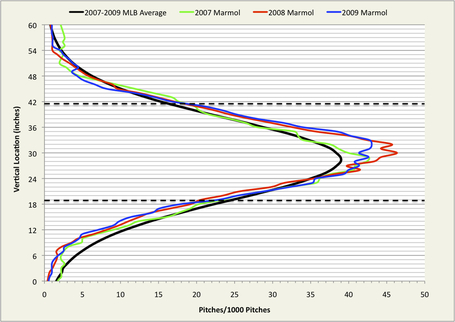 Hrmm... If anything, Marmol appears to exert better than average control in the vertical direction. He does this by avoiding putting his pitches low and out of the zone. What about the horizontal location? Well, here's the same plot for the horizontal axis, from the catcher's perspective (in other words, a right-handed batter would stand on the left side of this chart): 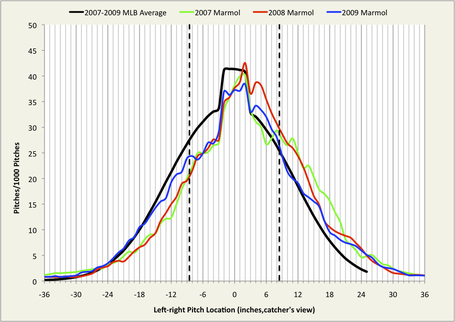 This is where Marmol's control issues show up. Pay particular attention to the right side of the figure. Marmol throws a lot more pitches to the right of the dashed line (outside to a right-handed batter) than the average pitcher. Perhaps more damning than the "normal" outside pitches are those that are -- as Harry Doyle would sarcastically say -- "just a bit outside." Marmol regularly misses the outer edge of plate by a foot or more. The average pitcher throws pitches a foot or less outside 19.5% of the time. Marmol did this 27.9%, 24.4%, and 20.9% of the time in 2007, 2008, and 2009, respectively. In other words, Marmol has an issue in that when he misses he often misses by a mile, and this allows other hitters to easily identify which pitches to swing at.

To be honest, these numbers scare me quite a bit. I don't see a ton of variation in his pitch location distributions from year to year, other than the spike in strikes in 2008. I fear that spike was an aberration. And in all 3 years, he showed an increasing tendency to throw the ball waaaaay outside. If that wasn't enough, teams have written the book on him. They know that hitters should be able to easily identify the pitches that are far off the plate, allowing them to take balls and swing at strikes. The bottom line is that Marmol either needs to put the ball close enough to the plate to entice hitters to swing, or he needs to put the ball over the plate more often, like he did in 2008. Unfortunately, I don't see any reason to think either of those things will happen in 2010.

Cubs fans should stock up on the Pepto Bismol... and someone should warn Ron Santo to take 9th innings off next year.