Before Ricketts Was The Name Of A Cubs Owner... (A Photo Essay)

Share All sharing options for: Before Ricketts Was The Name Of A Cubs Owner... (A Photo Essay)

... it was the name of a popular restaurant about a mile from Wrigley Field that used to advertise on the building on Waveland where you now see an ad for an Indiana casino and where, for many years, there was an ad for a national beer brand.

When those of us "of a certain age" were kids, that building had, for decades, an ad for WGN radio and television, the perfect ad for the stations that still carry Cubs baseball. But exactly when did that ad go up? This post was prompted by the following, that appeared on page two of the sports section of the dead-tree edition of the Chicago Tribune on Friday, October 30, the day Tom Ricketts was introduced as owner of the Cubs: 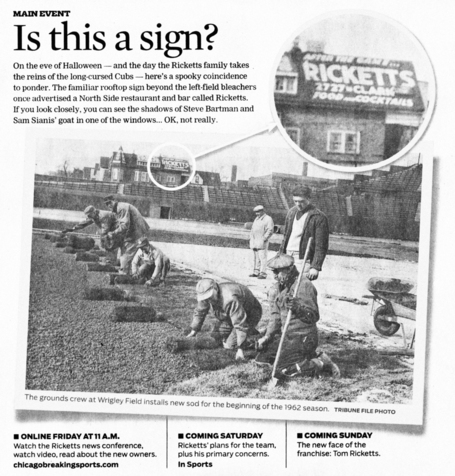 Before you go below the fold to read the rest of this history lesson, take a close look at that photo -- click on it to open a large version in a new browser window. That'll be important later on.

The Ricketts family that now owns the Cubs is, as far as I can tell, no relation to the Ricketts family that owned several restaurants in Chicago and the suburbs, beginning as early as 1904 and continuing into the mid-1970's. The restaurant at 2727 N. Clark, about a mile from Wrigley Field, was open until at least 1963, when that area began to suffer a bit of a decline, not to be stemmed until the late 1970's.

And, that restaurant advertised on the building on Waveland across from Wrigley for much of the time ... but until 1962? That didn't seem right to me; in addition, look again at the clothes the grounds crew were wearing when laying the sod. Those don't look like 1960's clothes, do they? There's a WGN ad visible on the building -- but it's only for WGN radio, not WGN-TV.

Armed with this information, let's look at the history of that building, along with a number of photos of historic Wrigley Field. The following four photos are courtesy of the Baseball Hall of Fame and the book "A Day At The Park" by William Hartel (all photos in this post will open a larger version in a new window if you left-click on them): 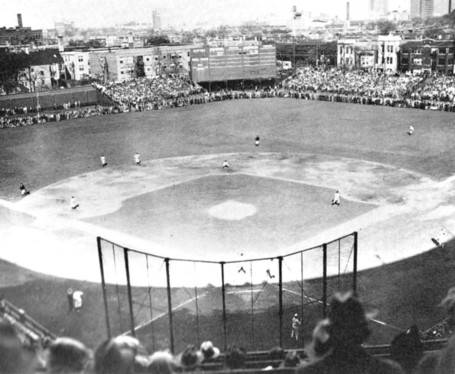 Wrigley Field in 1925. Note that the building didn't yet have the roof alcove that became a common sight there until it was removed before the 2009 season. 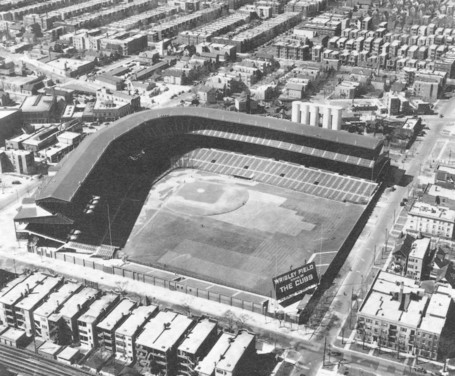 Aerial view of Wrigley Field in the early 1930's. Still no alcove on the building. Note the field being resodded. 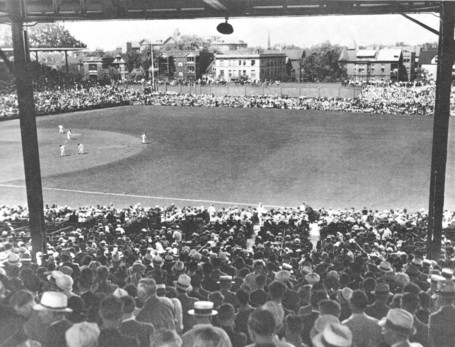 Wrigley Field in 1936. The building now has the alcove; it appears there's an ad there, but it's hard to read with the sun glaring off the rooftop. 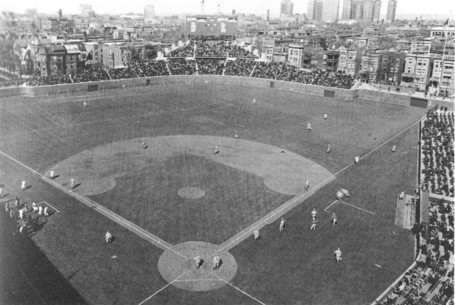 Wrigley Field in 1938, just after the brick-walled bleachers were built -- a clear view of the Ricketts ad on the roof of the building.

The Ricketts restaurant was also an advertiser in the Wrigley Field scorecard for many years -- here's a reproduction of the last such ad, in 1941: 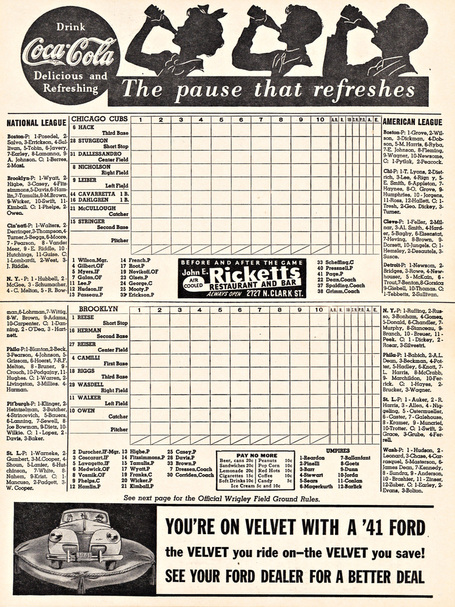 But that still doesn't tell us when the Tribune photo was taken. One clue is this: the center field bleachers were closed in 1952 because of complaints about hitters not being able to see the ball in a sea of white shirts; the only time anyone sat there after that was for the 1962 All-Star Game. This photo of Stan Musial and Yogi Berra taken at the '62 ASG appears to show the Ricketts ad -- but also an ad for WGN-TV. But that Ricketts ad might have been placed there just for that game, or for that year, and it doesn't match the photo in the Tribune, because there is no WGN-TV ad on the Tribune photo. To me, the "smoking gun" telling us the Tribune photo could not have been taken in 1962 is this photo, posted courtesy of eBay member "nicepictures": 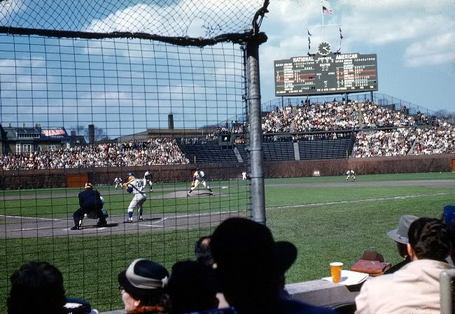 This remarkably clear photo was taken April 29, 1961 -- a game the Cubs lost to the Dodgers 9-4. The scoreboard precisely matches the scores of the other games that day, and the game you see on the bottom left says "NEW YORK/HOUSTON 1962"; that was the only year the AL had 10 teams and the NL had eight. And there's an ad on the building -- but it doesn't appear to be the Ricketts ad. The WGN-TV ad does appear to be on the top of the alcove.

My best guess is -- based on the following clues: the photo of the field being resodded in the early 1930's; the CF bleachers being open seating, the clothing the grounds crew is wearing, and the fact that before the resodding project of last winter, Wrigley Field hadn't been completely resodded since the 1930's -- that the photo that appeared in the Tribune on October 30 was probably taken sometime in the late 1930's or early 1940's, not 1962.

There's no huge point to this post -- just another bit of obsession about Cubs history. Thanks to Mike, BCB cartoonist, who helped me with research and scans for this post. And I'll leave you with one more remarkable historic photo, also courtesy of eBay member "nicepictures". If you think the iconic Wrigley Field marquee has always been red -- think again. Before 1963, it was... blue. REALLY blue. This photo was taken during a series vs. the Dodgers, either September 14, 15 or 16, 1962: 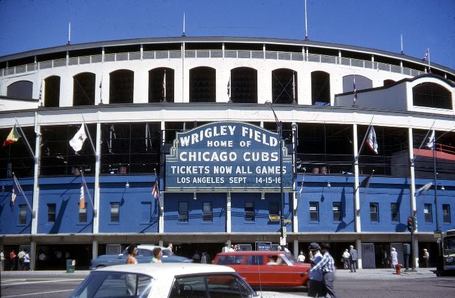 I actually like the look. Tom Ricketts -- or anyone in management -- if you're reading this, as part of your upcoming Wrigley Field renovations, how about restoring the marquee to its original color? Red is the team color of the Cubs' biggest rival. Blue... that feels right.