Share All sharing options for: Happy Thanksgiving From BCB

While you are enjoying your Thanksgiving Day, check out another historic photo of Wrigley Field, this one from 1975. A few things to look at before you go past the jump and find out exactly what day this picture was taken:

After the jump you'll find out what day this photo was taken, despite the lack of any on-field clues. 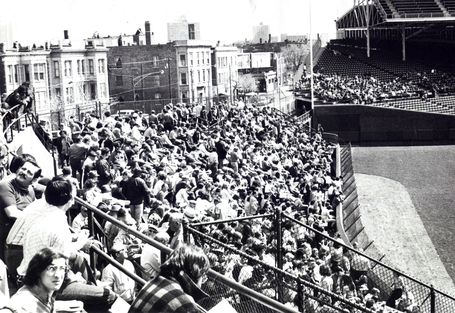 After George sent me this photo, we exchanged a few emails to determine what day it was taken. He remembered that it was during a homestand in late April vs. the Phillies, Cardinals and Mets. It couldn't have been either of the Cardinal games -- the Cubs opened the upper deck for weekend series. Taking a look at the rest of the games in that homestand, the only one that matches both the weather conditions and attendance was the last game of the homestand, May 1 vs. the Mets. Attendance was 5,637 -- as George told me, probably half of those were in the bleachers, and the game-time temperature was 50 degrees, warm enough to be in shirtsleeves in the sunny bleachers, but cool enough that fans in the other side of the park would have wanted to find any sun they could. Given the angle of the sun in the RF seats, this photo was probably taken fairly late in the game.