There's not much baseball front office activity on this holiday weekend, so I thought I'd post another bit of history.

A couple of weeks ago in this post, I commented on this Chicago Tribune article from October 30 (finally found an online link!) in which the photo caption read "The grounds crew at Wrigley Field installs new sod for the beginning of the 1962 season". In that photo, the sign on the building on Waveland & Kenmore -- now blocked from view from Wrigley by "temporary" boards -- was for the Ricketts restaurant about a mile from the ballpark.

I had not seen any photos of that building with the Ricketts sign after the 1940's, and that, along with the clothing of the grounds crew, made me think that photo was taken then.

Turns out the Tribune -- surprisingly enough -- was probably correct. After the jump, you'll see the explanation -- and more on this little slice of Cubs history -- courtesy of BCB reader Bill Wasik, who attended many games at Wrigley in the 1950's and 1960's, and who now lives in New Jersey. Before you read that, take a close look at the photo below, taken on April 29, 1961. 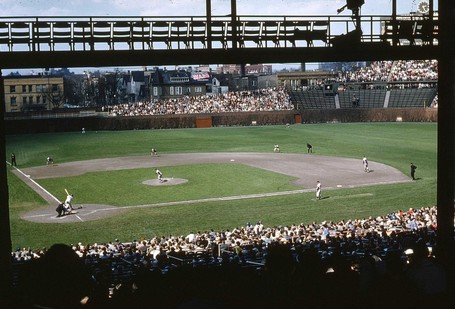 One thing I have noticed in researching these photo essays is that there are almost no photos of Wrigley Field in the 1950's available, either online or in books. The reason for that should be fairly obvious -- it was the Cubs' worst decade, attendance and interest was low, and so who bothered to take or save photos? I'm glad that 1961 photo exists, because that was one of the lowest-attendance years of the entire era (673,057, fifth lowest since 1945); little other photographic evidence of the ballpark and its environs exists from that time, and in it is contained the answer to this mystery. I'll let Bill Wasik explain:

Because you have invited comments on this obscure topic, I can offer my opinion that the Trib¹s photo was taken no earlier than 1960, when the WGN signs first went up on both the turret and alcove, and no later than 1962, which was the last year of the Ricketts sign. By '63, WGN had taken over the entire roof.

Also, I believe the sign in the April 1961 photo was a temporary banner that went up during the Bears season in 1960. This scrim advertised Dan Ward as the Democratic candidate for States Attorney in 1960. Like your neighbor's Christmas lights, it should have been taken down months before -- perhaps the building owner was waiting for Ricketts to pay his 1961 rent. (By the way, in the late 1930's the sign on the alcove roof was for Old Gold cigarettes. Watch "When It Was a Game" vol. 1 on DVD: When Smilin' Stan Hack appears you'll see both Old Gold and Ricketts show up clearly in the background of this early color film.)

While I don't have photos to back up my comments, I do recall spending many pleasant days in the bleachers in the late 50's and early 60's, sometimes standing at the back fence in left field during batting practice and watching Mays, Aaron, Adcock, Cepeda, and especially Frank Howard or Dick Stuart send balls flying across Waveland Avenue toward the old frame house.

Because Wrigley Field was such a dead zone in those days, even small changes were memorable. Ernie's became Ray's. The Fox Head 400 sign in right field went over to Miller High Life. The coal yard on Clark Street was now the site of Henry's Drive-In, while the Sinclair and Standard stations on Sheffield became strictly gameday parking lots. And WGN put up its signs on the old house ­originally with yellow lettering on a dark blue background, and later with the much more familiar red on silver.

That appears to be the definitive answer, and I thank Bill for emailing me with that much detail from a nearly forgotten era in Cubs history. Here's another photo from the 4/29/1961 game which shows -- in the upper left corner of the frame -- the Miller High Life sign that Bill is talking about. Also take note of how people dressed to go to a ballgame in those days. That game was played on a Saturday; attendance was 9,842 and the game-time temperature was 56, not too bad for a day in late April. 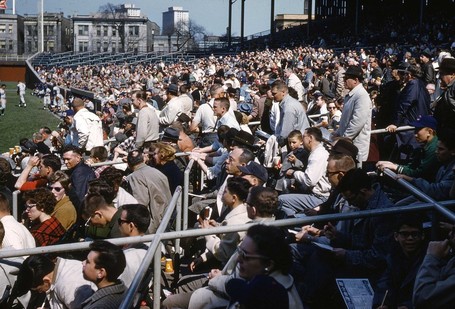