Share All sharing options for: Wrigley Field In 1950: A Photo Essay

Last week in the discussion of the signs on the Waveland building rooftop, I posted this photo from June 22, 1953 which I believed to be the earliest available color photo of the scoreboard.

That prompted Bill Wasik, who provided the answer to the Waveland mystery, to send me this photo, taken even earlier. After the jump find out when it was taken, and which players are in the photo. 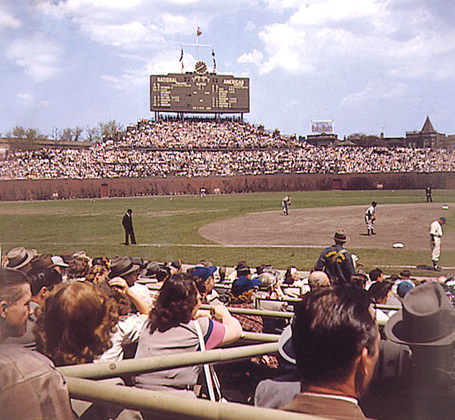 Here's what Bill sent me regarding this photo:

This is a rough composite of two 35mm slides taken with a stereo camera on Sunday, May 14, 1950. Pittsburgh was in town for a doubleheader, with Johnny Schmitz facing the Pirates’ Junior Walsh. As we can infer from the scoreboard data and the position of the fielders, Wayne Terwilliger must be stepping in to the batter’s box to lead off for the Cubs in the bottom of the first.Players visible include Tom Saffell in center, Pete Castiglione at short, and the legendary Nanny Fernandez at third. The man in black on the third base line is Hall of Fame ump Al Barlick. Not seen but present are, surprisingly, Honus Wagner, who was still a bench coach for the Pirates in 1950 and, over in left field, Ralph Kiner. Ironically, Kiner was the player most active in lobbying the league to have Wrigley’s centerfield bleachers closed in 1952.

Kiner came to the Cubs in 1953 — after several CF bleacher sections had finally been closed from lobbying by him, as well as several members of the Cardinals including their manager, Eddie Stanky. The first game for which those sections were closed was a game vs. the Cardinals on April 20, 1952; on April 27 the Cubs announced they would be closed for “the rest of the year”, but no one sat in those sections (which now is the batters’ eye lounge/skybox) after that, except during the 1962 All-Star Game.

A few other things of note in the photo: