Share All sharing options for: Cubs Historic Photos: First In A Series

Recently, I was introduced to Leo Bauby, who owns a very large collection of historic Chicago sports photos, including hundreds of Cubs photos from the 1960's and 1970's. They were taken by a photographer primarily working for the Sporting News and Baseball Digest. Leo has graciously granted me permission to post these photos -- there's more information after the jump. Here's the first one; see if you can guess the pitcher and the date: 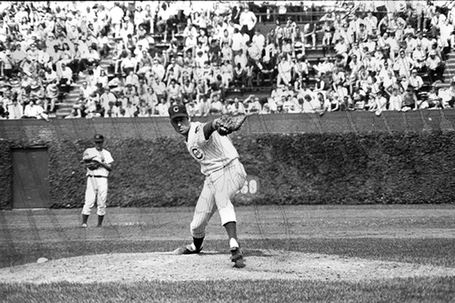 There are so few pitchers in major league history who have thrown with motions like that, it's easy to guess who it is -- the answer is Ted Abernathy, who set the major league save record in 1965 with the Cubs (31, broken the next year) and was later traded away; he returned in 1969. This photo was taken in 1969; Leo's information had a date of July 14 on it, but Abernathy didn't appear in the July 14 game.

This was with a large group of photos that all had that date on them, but it must have been taken on July 16, because they all were from a game vs. the Mets; the July 16 game was the only game in that series in which Abernathy appeared.

The Mets blew out to a 6-0 lead after the top of the 2nd; the Cubs closed to within 6-5, but wound up losing 9-5. Abernathy came into the game to start the top of the seventh and if you look behind him, you'll see second baseman Glenn Beckert standing around, not ready for action. This photo must be of one of Abernathy's warmup throws. You can also see some empty bleacher seats; attendance that day was a full house of 36,795, but you can understand why people might have left early with the Cubs down 6-0 before they even batted twice. The game also ran three hours. That doesn't seem long to us now, but it's far longer than the average game in the late 1960's.

You'll also see a watermark on the photo. That's because one of the reasons Leo Bauby is granting permission to me to post these photos, is that they are all available to purchase as prints. Here's Leo's photo website; as you can see it's a work in progress, but if you are interested in purchasing a print of this photo -- or any of the others I'll be posting over this offseason -- you can contact him at this email address.