Share All sharing options for: Cubs Historic Photos: Second In A Series 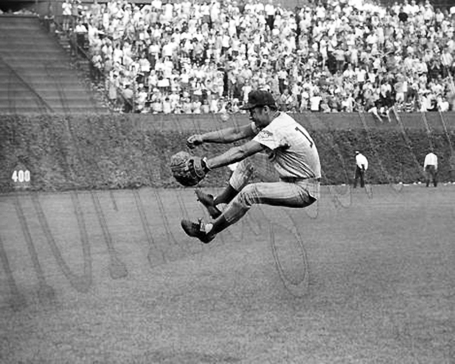 The date that was attached to this photo when originally sent to me would have solved a mystery of history, if true. It was tagged by the photographer "June 6, 1969". On that date the Cubs beat the Reds 14-8.

Divisional play began in 1969, and although the Reds were and are in the Eastern time zone, east of Chicago, they wound up in the NL West. Apparently, the presence of the Braves and Reds in the NL West was due to the influence of the Cubs; the Cubs wanted to be in the same division with the Cardinals but neither wanted to be in the West, where they'd have many more late-night TV dates. So the Cubs used their pull to push Atlanta and Cincinnati to the West, where they would stay till realignment in 1994.

Anyway, that meant that the Reds only traveled to Wrigley Field twice in 1969 and the Cubs only beat them twice in seven games (should have been only six, but the June 7 game was delayed by rain and then halted for darkness in a 5-5 tie and replayed). The photo was definitely part of a set taken in a game vs. the Reds; the temperature on June 6 was only 60 degrees, so Santo wouldn't have been wearing short sleeves that day.

In an era with curtain calls, Jose Valverde acts and outfielder bumps after wins, those of you in your 20's or 30's might wonder what the fuss was over Santo's heel clicks. It was a different time. Players just didn't do that "in your face" kind of thing in 1969 -- it was widely panned by broadcasters, writers and fellow players, and Santo became one of the most disliked opponents around the National League. It may, even to this day, be one of the factors keeping him out of the Hall of Fame.

It was innocent. Santo was just happy with winning. If he only knew what was to come after that August 28 game, he might not have done it at all, and the heel clicks disappeared after 1969.

Once again, if you'd like a print of this photo, email Leo Bauby for ordering information.