Share All sharing options for: Cubs Historic Photos: Third In A Series

At first glance you might think you wouldn't have a clue as to when this photo was taken. There are enough clues, actually, to figure it out -- but I'll help you out by telling you it was taken in 1970. See if you can sleuth it out, then check after the jump for the answer. 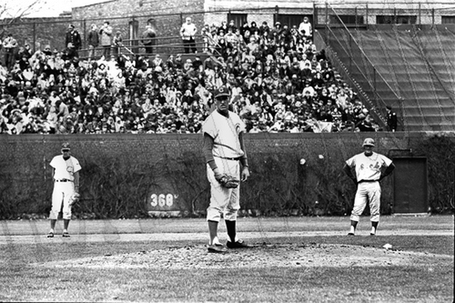 Clue #1: no ivy on the walls and people in the bleachers in coats -- so it had to be early in the season, likely April. The Cubs played the Expos -- it can't be any other team, with that jersey -- two games at Wrigley in April 1970, on the 17th and 18th. That was a Friday and Saturday; a Sunday game was rained out.

The crowd on Friday, April 17 was 6,855, too small to have that many people in the bleachers. So it must be the Saturday, April 18 game, which had an attendance of 21,890. The further clue that clinches the Saturday date is the presence of lefty Kenny Holtzman on the mound; Holtzman pitched a complete game and the Cubs won 8-1.

But when in the game was this photo taken? The Expo leading off second base is Ron Fairly (#6). Holtzman gave up four hits and five walks in the game -- but only one extra-base hit, a triple. Fairly drew three walks and stole second once. He was on second base after stealing second in the second inning, and again after a groundout in the top of the seventh.

And there, the trail goes cold -- so to speak; it was 48 degrees that day. It could have been either inning, though I'd lean toward the second, with the bleachers full; on a cold day they'd have likely started to empty out in the seventh inning of a game the Cubs were leading 6-1.