Share All sharing options for: Cubs Historic Photos: Fourth In A Series 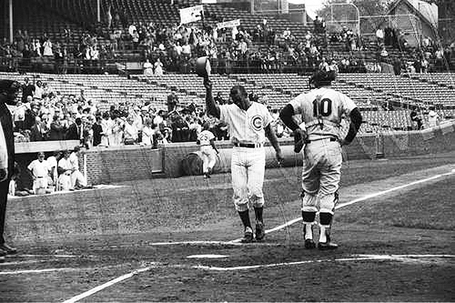 This one isn't so much a "guess the date" as it is to bring you a slice of Cubs history that you may not have seen before. I'm sure you recognize the player, and most likely can easily guess what day this was taken.

This is the aftermath of Ernie Banks' 500th home run, hit on May 12, 1970, off Pat Jarvis of the Braves in front of a very small crowd of 5,264 on a Tuesday afternoon at Wrigley Field.

You've probably seen the grainy WGN-TV video of this home run, after which Jack Brickhouse yelled, "Everybody on your feet! This is it!" This photo shows Ernie doffing his helmet to the small crowd in attendance. The catcher in the photo is Bob Tillman, who was in his last major league season. The only other clearly identifiable player in the photo is Willie Smith (#25), who was on his way to the bullpen or clubhouse, apparently (the clubhouse was located in the LF corner until 1984, which meant the Cubs would traipse across the field after the game, win or lose).

Ernie's 2nd-inning HR made the score 2-1 Atlanta. The teams traded single runs in the seventh, and the Cubs were three outs away from a 3-2 loss when Billy Williams homered off Hoyt Wilhelm -- who would pitch briefly for the Cubs later that year. The Cubs won 4-3 in the 11th on a Ron Santo single with the bases loaded.