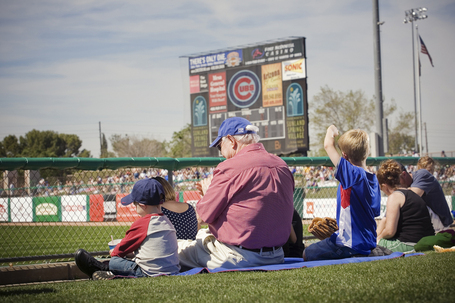 Earlier this week I went on record as supporting the city of Mesa, Arizona in its effort to keep Cubs spring training there. Things are heating up. Earlier this month the city council of Mesa was supposed to routinely approve the expenditure of up to $750,000 for two new buildings to host indoor batting cages for the Cubs. However, there's now a catch to that:

If it's possible for ears to do a double-take, mine did this morning when Mayor Scott Smith said "the silence ... was deafening" from the Chicago Cubs about building batting cages for the team at Fitch Park.

After Smith's comments, the council unanimously approved the $684,021 contract -- but with the stipulation that no money is to be spent until some of the uncertainty about the team's future is resolved.

And in an apparent effort to end that "deafening silence", Mesa City Manager Chris Brady will be in Chicago today to talk with Crane Kenney and Tom Ricketts about the future of spring training in Mesa.

Which makes this morning's post even more timely. I recently sent some questions via email to Mayor Smith, who graciously agreed to answer them. After the jump you'll hear firsthand from Mesa Mayor Scott Smith. In addition, I'm attaching a poll to this post so you can express your opinion. Please read the question carefully before you answer.

BCB: The Cubs have trained in Arizona since 1952 (except for one year in Long Beach, CA in 1966), and in Mesa continuously since 1979. You're now getting a challenge from a group in Florida that wants the Cubs to move there. Can you describe the process you are taking to keep the Cubs in Mesa?

Mayor Smith: First, Mesa has identified for the Cubs sites for a state-of-the-art stadium, practice fields and clubhouse/training facility. The stadium site includes property suitable for the development of a Cubs-centered entertainment district to be known as "Wrigleyville West." We have also introduced the Cubs to private developers with whom they will partner in the commercial development. Each of these sites and development partners more than meet both the baseball operational needs and the business opportunity/development potential for the Cubs and fans. In short, the Cubs and their fans could have in Mesa the very best Spring Training facilities and experience in all of baseball.

In November, the Ricketts visited Mesa. The City brought together political leaders from the city council to Arizona Governor Jan Brewer, and community and business leaders to welcome the Ricketts and to demonstrate the unmatched depth and breadth of political and community support for the Cubs in Mesa. Even Senator John McCain appeared via video from Washington. The Ricketts visited all of the potential stadium sites and heard from each of the private developers.

We have sought to demonstrate to the Ricketts that over 50 years of Cubs spring training in Mesa brings more than tradition: it also brings incomparable community support and business opportunity that cannot be replicated.

The combination of overwhelming political support from our federal, state and local leaders combined with so many great development options convinces me that Mesa has delivered the best package the Cubs can ask for.

BCB: What are some of the locations being considered for a new Cubs spring training site?

Mayor Smith: We presented the Cubs with six potential sites for a new stadium and spring training facility in Mesa. All of them are located in the eastern part of the city, in close proximity to the Loop 202 Red Mountain Freeway between Greenfield Road and Phoenix-Mesa Gateway Airport. All of the potential sites have easy freeway and airport access. The Cubs have indicated a preference for a couple of sites in northeast Mesa, and those appear to be the front runners.

BCB: The Diamondbacks and Rockies new complex, opening in 2011, is on Native American land. Are you considering partnering with one of the local tribes?

Mayor Smith: We are open to the possibility of partnering with a tribe, but have not had anything other than what I would call very informal and non-substantive talks with any tribal organization.

Mayor Smith: Our first priority is to keep the Cubs in Mesa. The role the HoHoKams will take should the Cubs stay has not yet been determined.

BCB: In your opinion -- and obviously, as mayor of Mesa you want the Cubs there -- why should they stay in Mesa (or in the Valley) rather than move to Florida?

Mayor Smith: First of all, the Cactus League is THE place of choice for teams and fans in the spring. That is the reason why only one team has moved from Arizona to Florida to train in the past 20 years. That team was the Cleveland Indians, and they moved back to Arizona last year! Over the years, Mesa has proven it can deliver the finest spring experience for the Cubs and its fans. HoHoKam Stadium is the third stadium Mesa has built over the years for the Cubs, and we can do it again! We have the fan base, we have the perfect spring weather, we have the sites that provide the best business opportunity for the Cubs. Springtime in Arizona is a part of Cubs tradition. Cubs fans want the Cubs to stay in Mesa. Cubs players want to stay in Mesa. Cubs employees overwhelmingly want to stay in Arizona. It is no accident that the Cubs sell out nearly every spring training game and consistently lead the Cactus League in ticket sales. Why Mesa? I’ve heard Florida say that Mesa has good things, but where are the beaches? Well, beaches are great, but there are over 12,000 miles of coastline in the United States; there’s only one Sonoran Desert, only one Grand Canyon, and only one place for the Cubs to spend the spring: Mesa, Arizona.

BCB: Are you prepared to meet or beat any offer that comes to the Cubs from the Florida group?

Mayor Smith: We will present a proposal that will provide the Cubs with the best training and fan facility in baseball. We believe that the sites in Mesa also offer the best long-term business opportunity for the Cubs. We are not going to engage in a bidding contest with Florida, because I don’t believe we have to. If we had a substandard offer, I’d be concerned. However, I know Mesa has submitted a stellar proposal that has unmatched political support and fantastic opportunities for a "Wrigleyville West". When you have put your best foot forward, there is no competition. We simply hope the Cubs make their decision based on the merits.

BCB: Is there anything else you'd like to say about this issue that hasn't been covered in the other questions?

Mayor Smith: We can only do so much to convince Cubs ownership that Mesa is the right place for spring training. We need the help of all Cubs fans. If you want the Cubs to stay in Arizona, please let the Cubs know by calling, writing, emailing, voting, or commenting on line. Fans need to speak up, or the traditions we hold dear will be ignored and will be taken from us. Let the Cubs know how you feel!!!