Share All sharing options for: Cubs Historic Photos: Sixth In A Series

The catcher you see in this photo had, by the date it was taken, already established himself at a very young age as one of the top catchers in the game. Go past the jump to find out when it was taken. 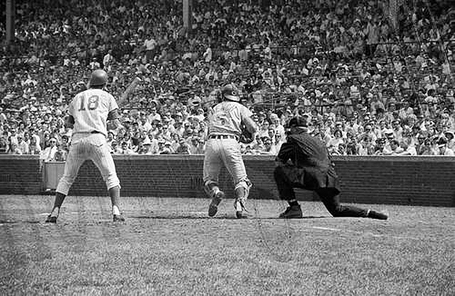 This photo was in a large group of pictures from a 9-8 loss to the Reds on August 25, 1969. That was a wild game in which the Cubs spotted the Reds a 9-4 lead, only to score four runs in the bottom of the ninth, all with two out, and left the bases loaded.

Glenn Beckert is the hitter; Beckert batted three times with runners on base, which appears to be the case here as Johnny Bench prepares to throw toward either first or second. In the third inning, Beckert singled after Don Kessinger led off the inning with a single. In the fifth, he came up with runners on first and second and nobody out and singled to load the bases (the runner on second was pitcher Bill Hands, which is likely why no run scored).

And in the wacky ninth inning, walks put runners on first and second with nobody out, and Beckert lined out to left field.

Looking at the shadows, I'm guessing it's the third-inning at-bat, since you can see faces in the first-base boxes still in the sun -- you wouldn't see that later in the game. The Cubs lost the first three of that four-game series to Cincinnati and lost 2.5 games off their first-place lead. No need to rehash what happened after that.