Obviously, these players aren't Cubs. Follow me after the jump to discuss the significance of this photo. 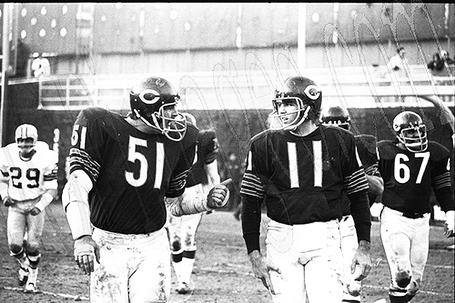 This photo was taken on the date of the last NFL game played at Wrigley Field, a 35-17 Bears win over the Packers on December 13, 1970. Wrigley Field held the record for hosting the most regular-season NFL games (365) until 2003. Giants Stadium passed it that year, but only because both the Giants and Jets played there. Lambeau Field surpassed the 50 seasons that Wrigley hosted football (1921-70) in 2007.

#51 should be instantly recognizable to you as Hall of Famer Dick Butkus. #11 is quarterback Jack Concannon, who that day threw for 338 yards and four touchdowns. (#67 is lineman George Seals, and the Packers' #29 is defensive back Al Matthews.) Note the "C" on the helmets was plain white -- the orange stripe within the "C" on the Bears helmet logo wasn't added until a couple of years later. In fact, there was a time when Bobby Douglass was the starting QB when the Bears seriously considered changing their helmet color to orange so that Douglass could see his receivers better (he was famous for overthrowing just about everyone).

What's also fascinating about this photo is what you see in the background. Behind the LF catwalk are -- well, what are those? Curtains? Some sort of windscreen? (Doubtful, with the holes in it.) If anyone here attended Bears games in the last few years at Wrigley Field, can you tell us what those were?

Remember, if you want high-quality prints of any of these historic photos, email Leo Bauby at this address.